Pip has a passion for life.

Being someone willing to try almost anything, Pip has always made the most of every opportunity, discovering a whole host of joyful pursuits along the way.

And yet, Pip’s passion for life remained.

It was a horse riding accident that resulted in Pip becoming tetraplegic.

Being part of an active family, her husband was out playing golf when he received the news that Pip had suffered a major injury.

Initially, she was taken to a hospital in Southport for emergency treatment. Five weeks into her stay, Pip caught pneumonia, which left her fighting for her life. Fortunately, after 1.8 litres of water were drawn off her lung, Pip began to recover.

All this happened right in the middle of the Coronavirus crisis. 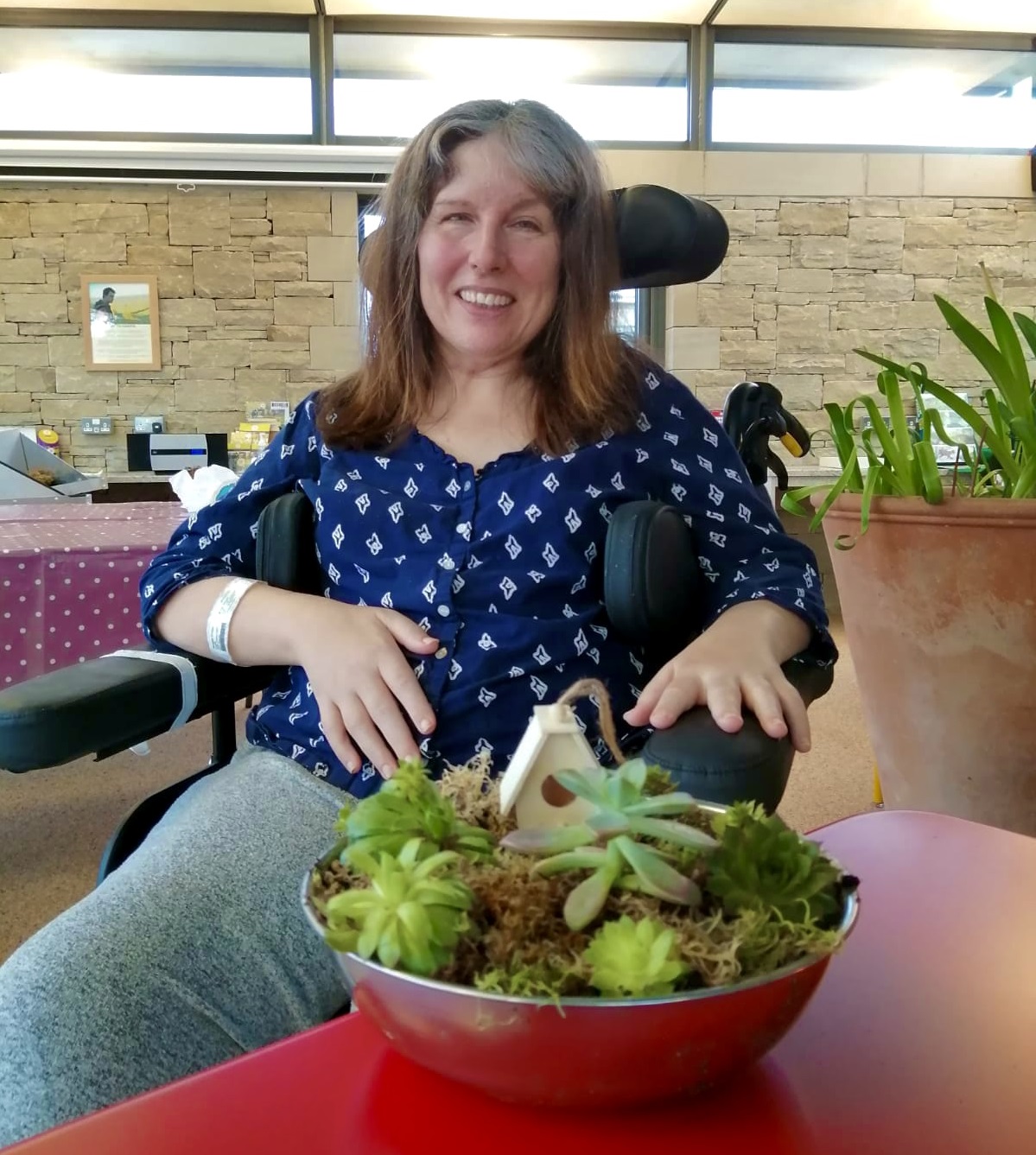 After a short while, Pip was strong enough to be transferred to the Midland Centre for Spinal Injuries (MCSI) at the Robert Jones & Agnes Hunt Orthopaedic Hospital, which was where she remained throughout lockdown.

It wasn’t long before Pip became a daily visitor to Horatio’s Garden Midlands.

Away from her friends and family, she and her husband were only able to see each other via FaceTime for much of the eight months she spent in hospital. On the three occasions her husband was able to visit in person, both he and Pip found Horatio’s Garden to be an absolute haven.

In the face of extraordinary challenge, Pip was a constant, upbeat and positive presence in the sanctuary.

Finding pleasure in the simplicity of the great outdoors, she soon began attending every workshop she possibly could with Head Gardener Imogen.

At first, Pip worked with the support of the Occupational Therapy team, who sowed seeds as she chose them in her horticultural therapy sessions.

With the seasons shifting and her confidence growing, she then began to independently engage in flower arranging. Spending many happy hours with Imogen in the oasis, Pip would choose the appropriate flower, direct Imogen as to how and where she should cut it, before telling Imogen precisely where to place it in her vibrant display. 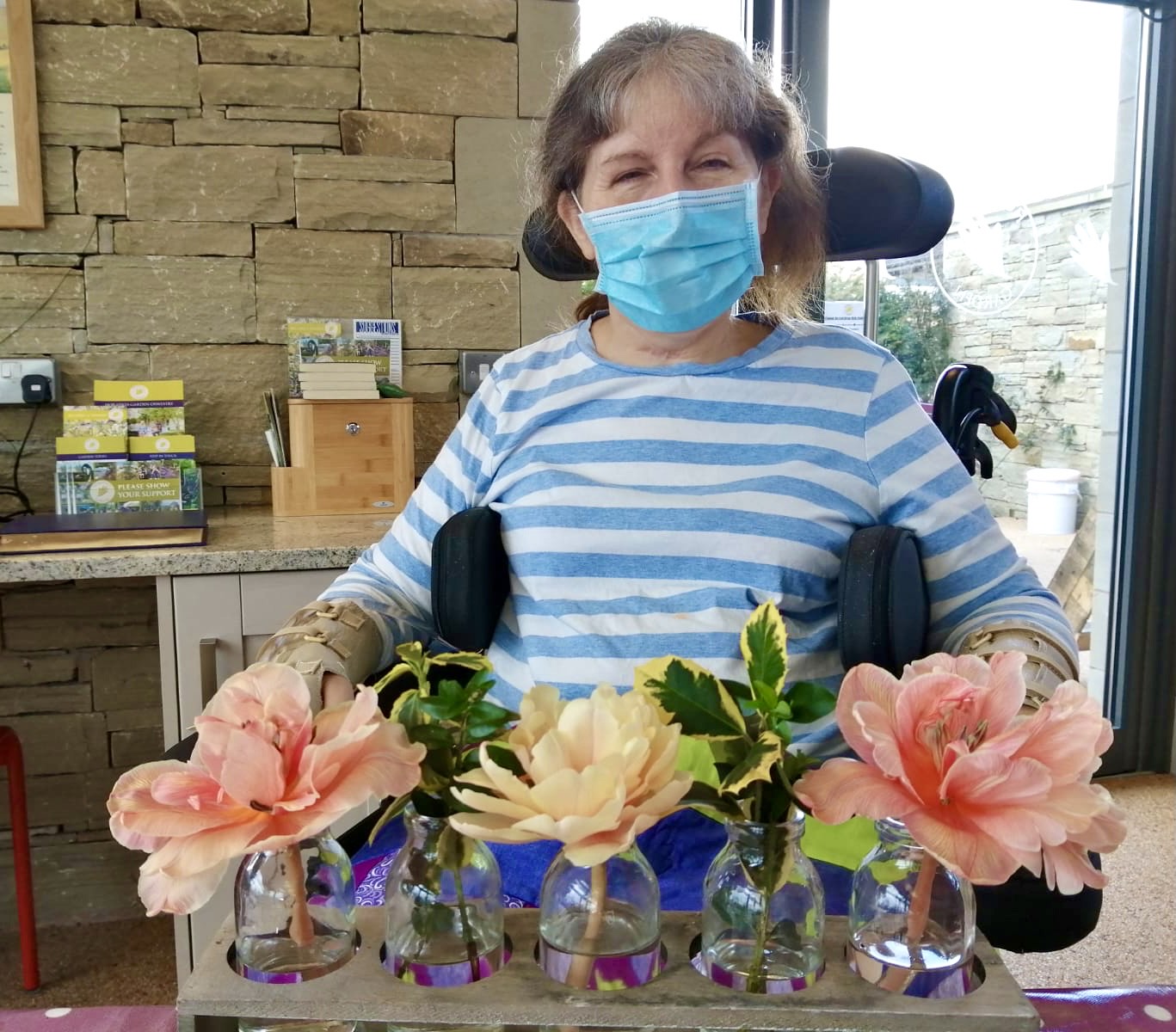 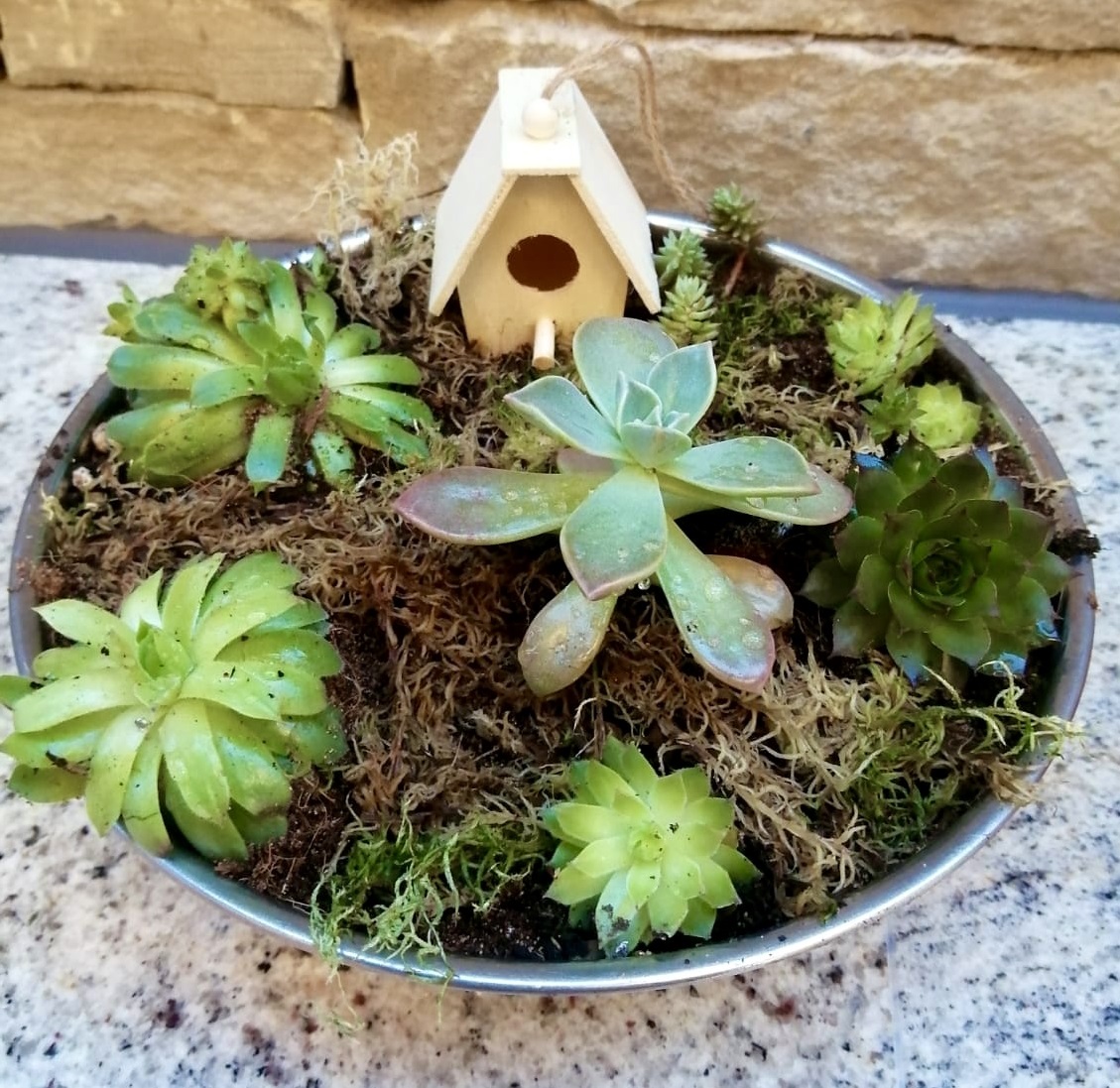 Similarly, she loved designing and planting up a miniature garden, as well as painting the miniature house sitting snugly within it.

Each activity placed Pip firmly in the present, so much so that it was only in hindsight that she realised how wonderful all her ventures had been in supporting her rehabilitation. They had given her the opportunity to practice directing the people helping her, a vital skill that would make her return home just a little bit easier.

When not busy gardening, Pip simply relished being able to relax in the garden and garden room, a place where she loved to watch films and appreciated being able to get to know others spending time in the spinal centre.

“It is so beautiful in the garden room; I absolutely adore it! It is so hygge. Hygge is everything warm, comfortable and cosy. It often involves wood and a fire (which you have here!), friends and family.”

Forever full of brilliant ideas, Pip channeled hygge herself. She helped her fellow patients however she could, with her natural empathy, kindness and enthusiasm becoming a source of support and encouragement to many.

Her generosity of spirit was most memorable at Christmas, when she bought gifts for the NHS staff who had taken care of her. Buying them a small Horatio’s Garden mug each, she and Imogen worked together to package each parcel beautifully. Pip designed every gift tag, all bearing a festive leaf, whilst she also carefully topped each bag with ribbon and a handful of small fir cones. 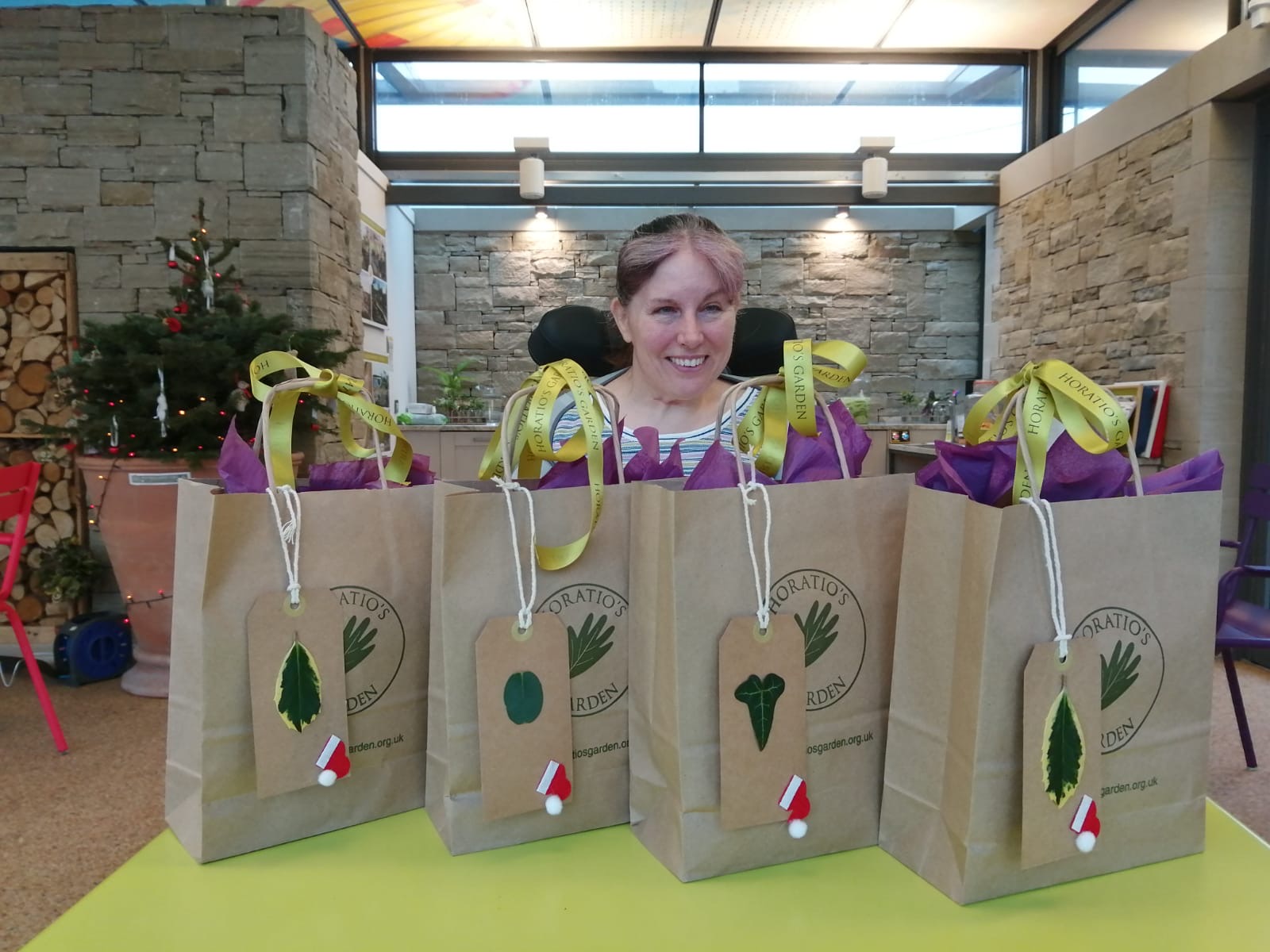 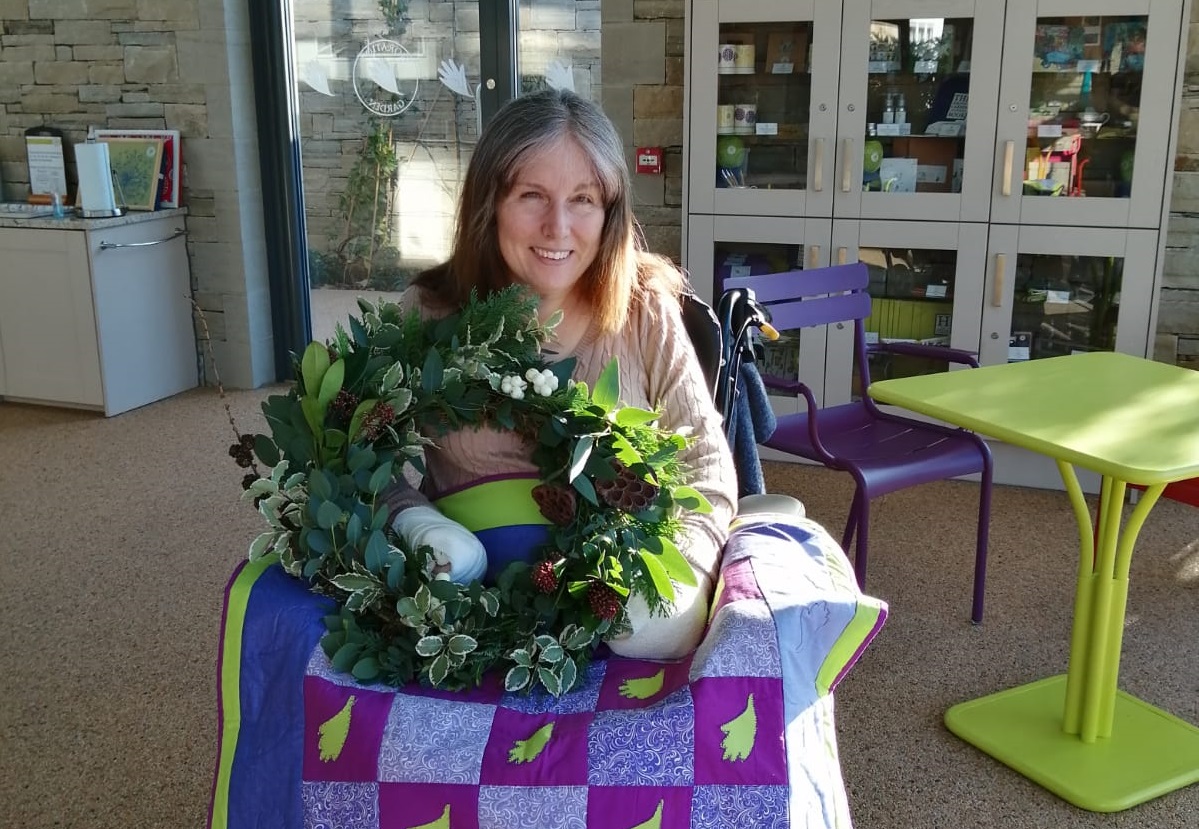 With some foliage left over, Pip decided it was only right to create a festive wreath too. Naturally, this warmed everyone’s hearts with a touch of festivity, whilst she was kept warm herself by various volunteer-knitted goods!

For all her selflessness and optimism, there were times when Pip was understandably emotional.

It was during these moments that the garden became more of a lifeline than ever, a place offering solace and calm whenever she needed it.

In her own words, “Everyone in Horatio’s Garden Midlands, especially Head Gardener Imogen, have made a huge difference to my stay and recovery, just as the garden, garden room, horticultural therapy, craft and films have too. I can’t thank you enough for creating this beautiful place.” 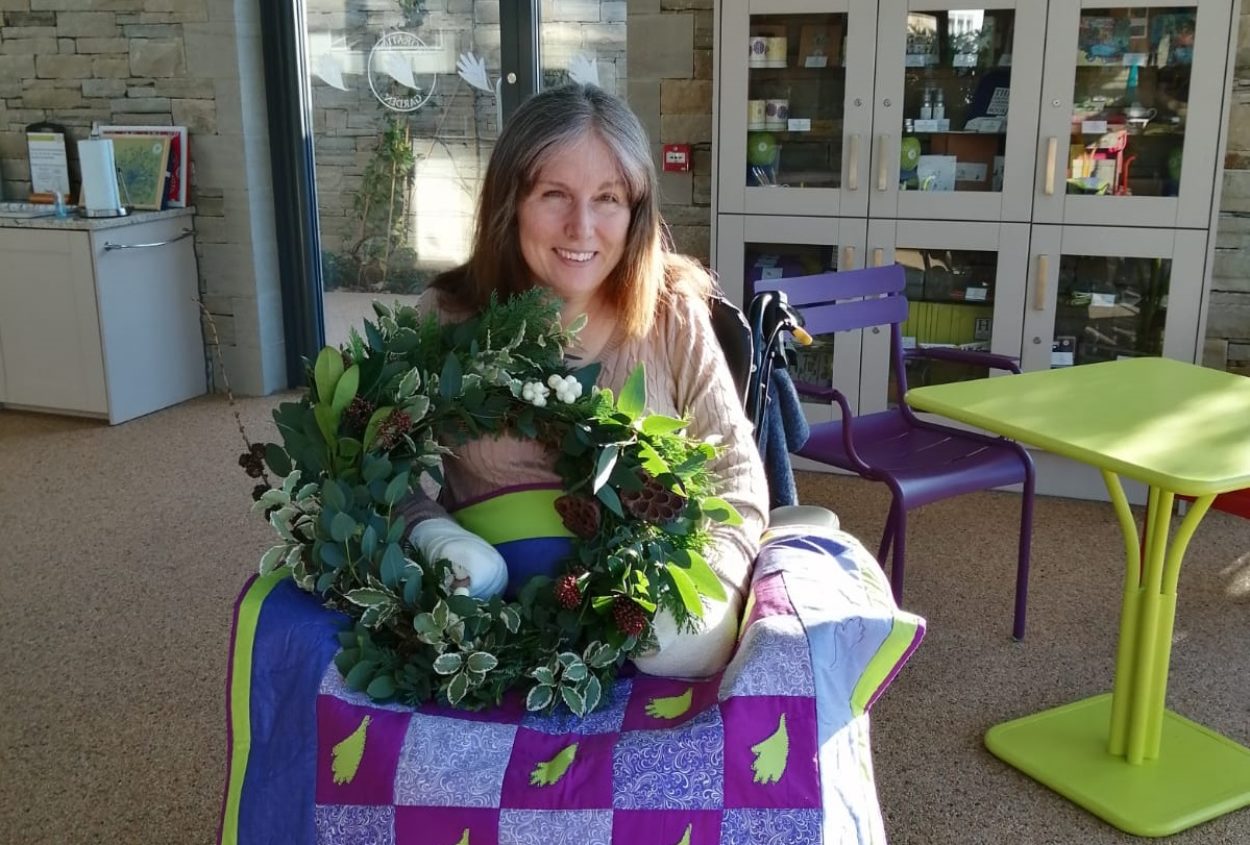 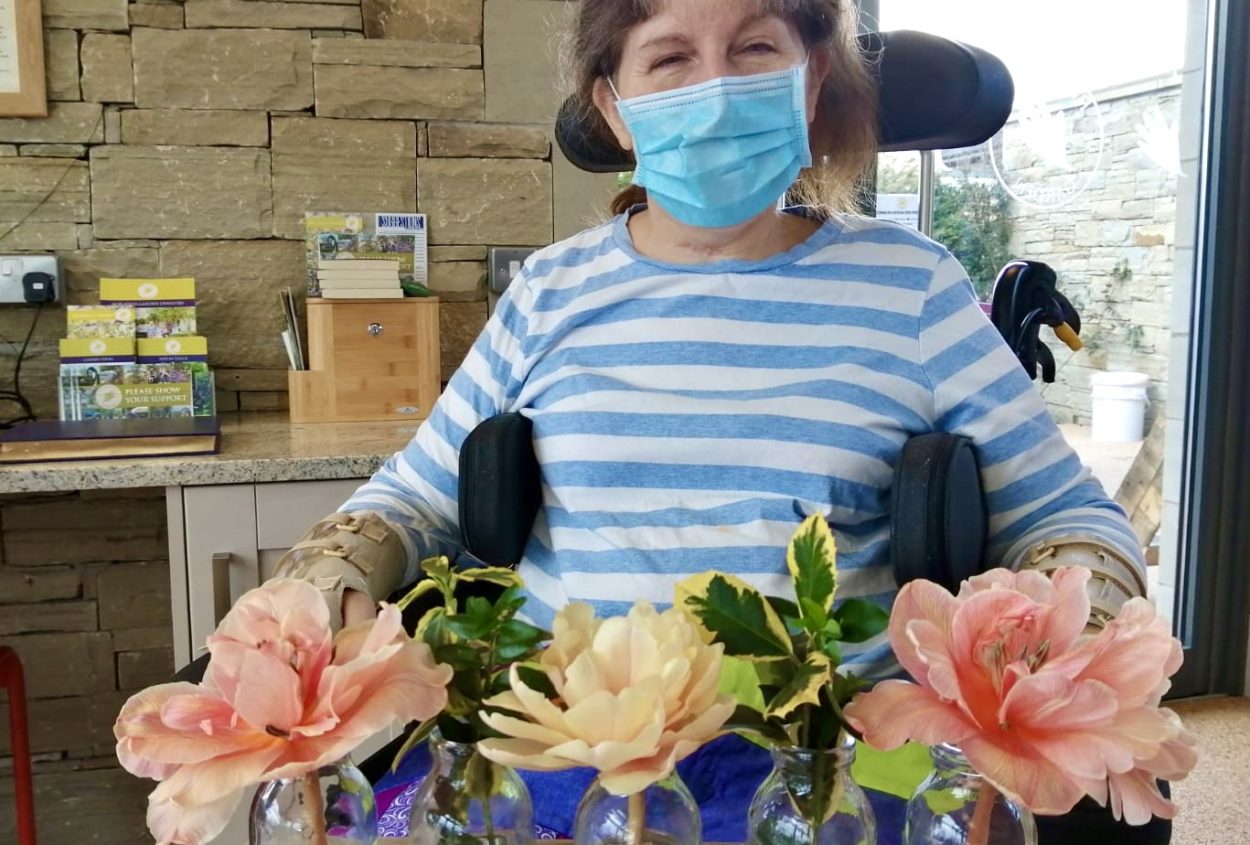 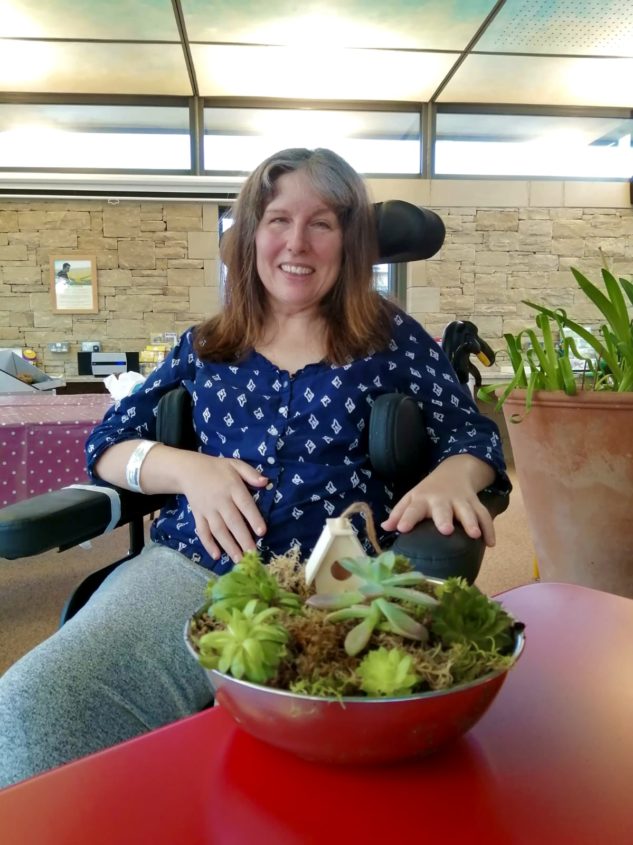 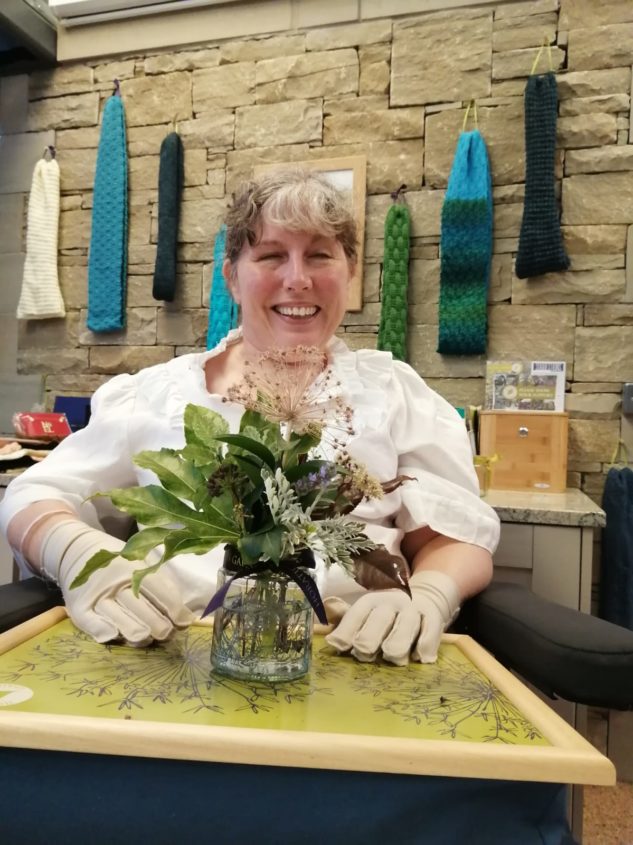 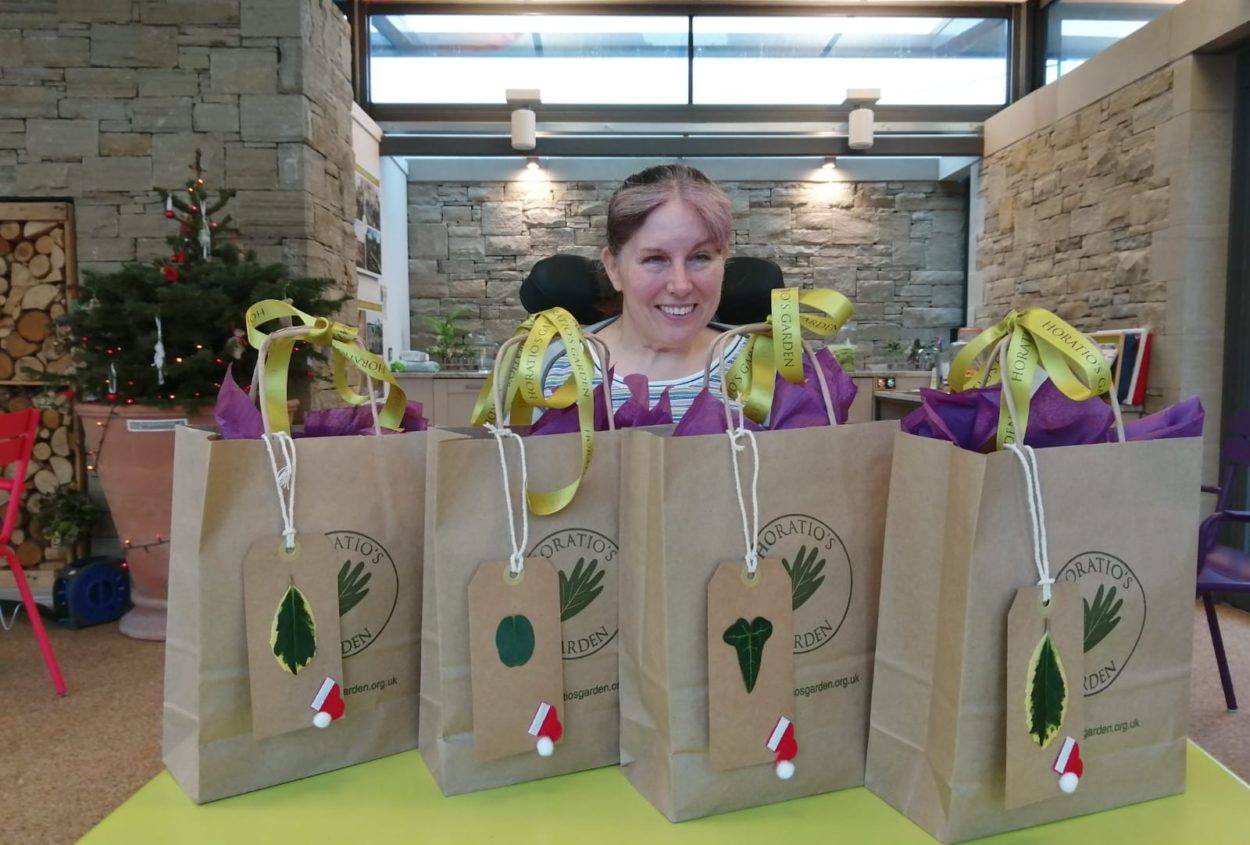 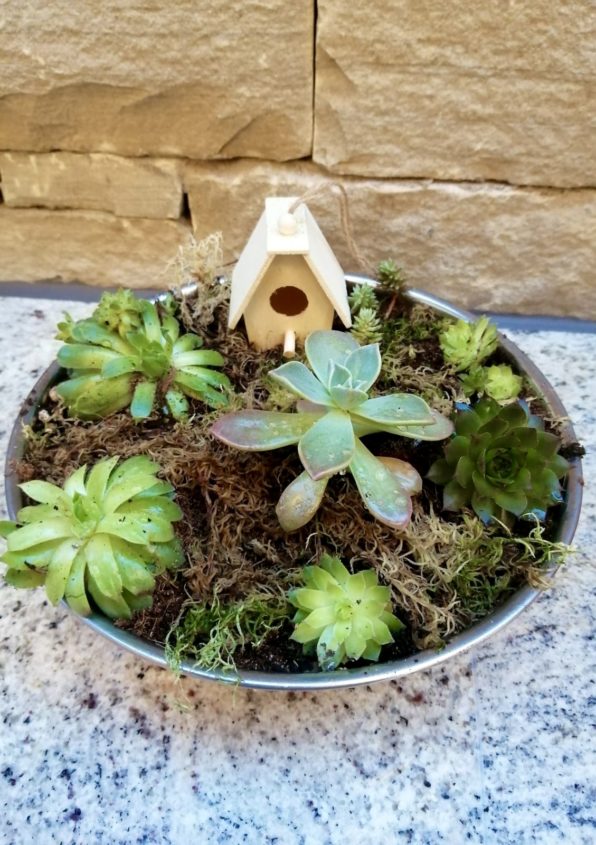 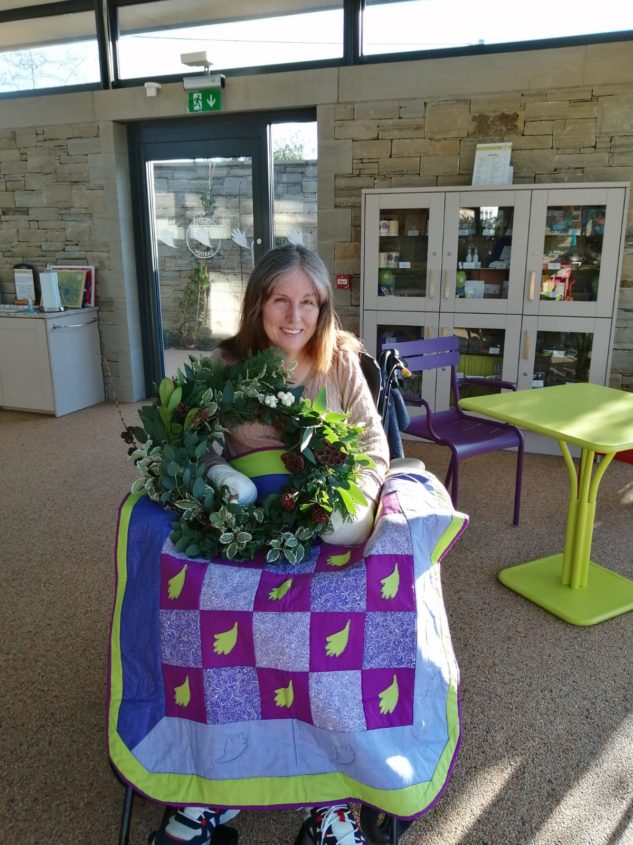 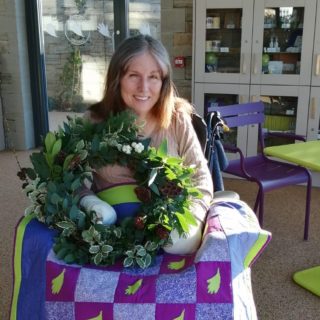 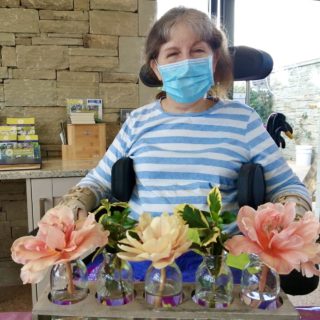 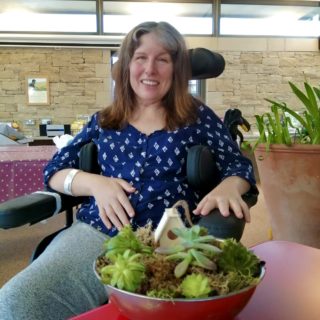 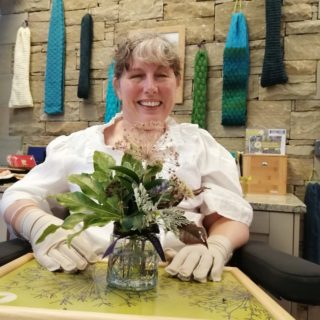 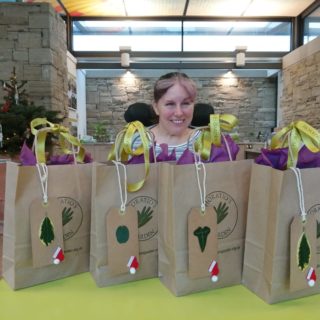 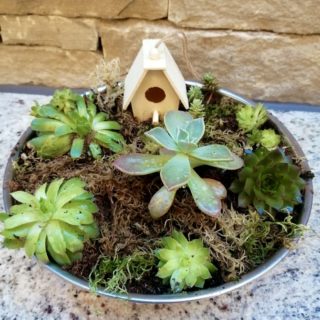 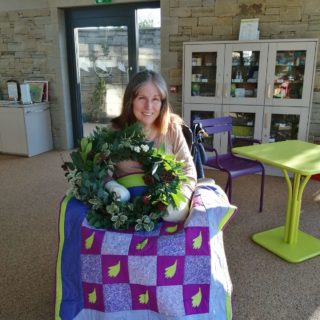