Picking up from where she left off, artist in residence Claire Waltier MacGillivray has had yet another brilliant week in Horatio’s Garden Midlands.

She was once again joined by a small gathering of patients, with two people painting and others dropping by as and when they could. This week’s theme centred around mandalas, reflecting Claire’s promise to work with Nawid, who expressed an interest in collaborating with Claire to create a large mandala artwork on her last visit to the garden. 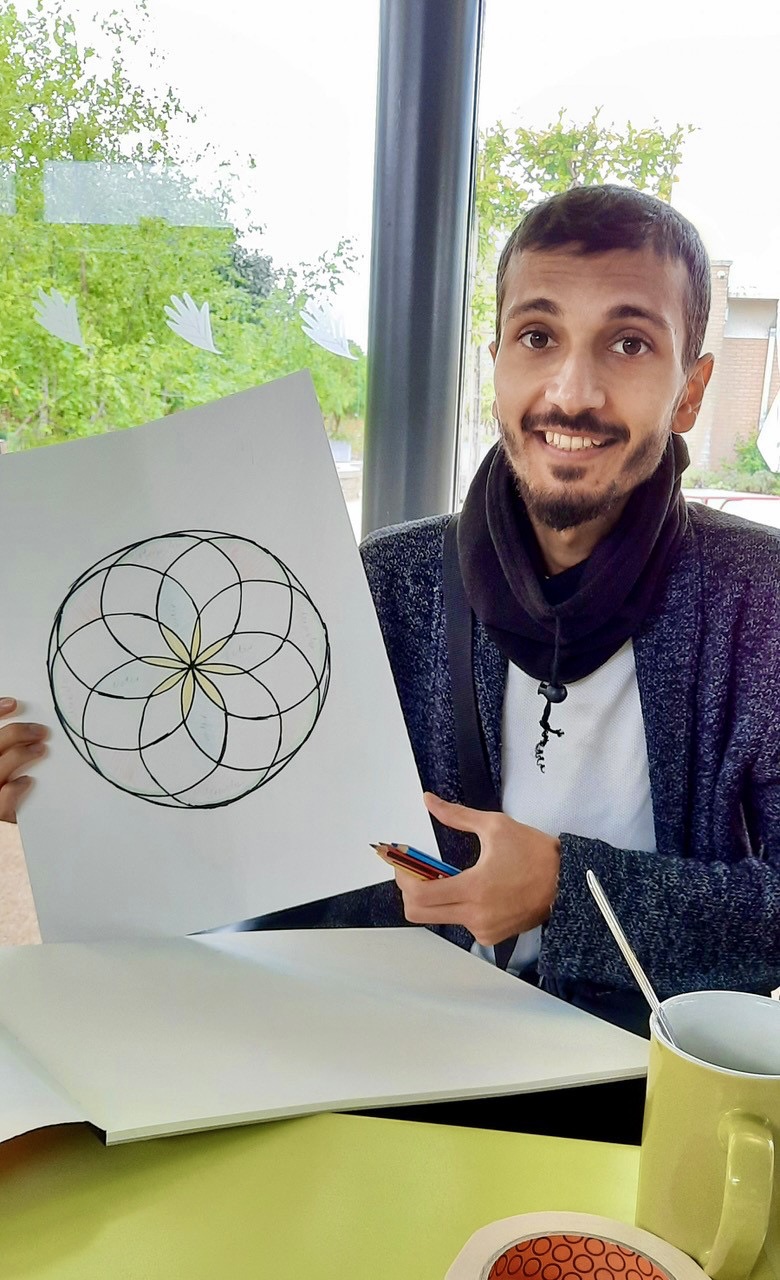 With plenty of books offering mandala inspiration in her possession, Claire laid her collection out on the table and it wasn’t long before her and Nawid’s project caught the attention of others passing by.

One lady was especially intrigued by the books, so much so that she decided to create her own. Taking cues from one of the mandalas before her, she carefully used a protractor and ruler to pencil her intricate creation. 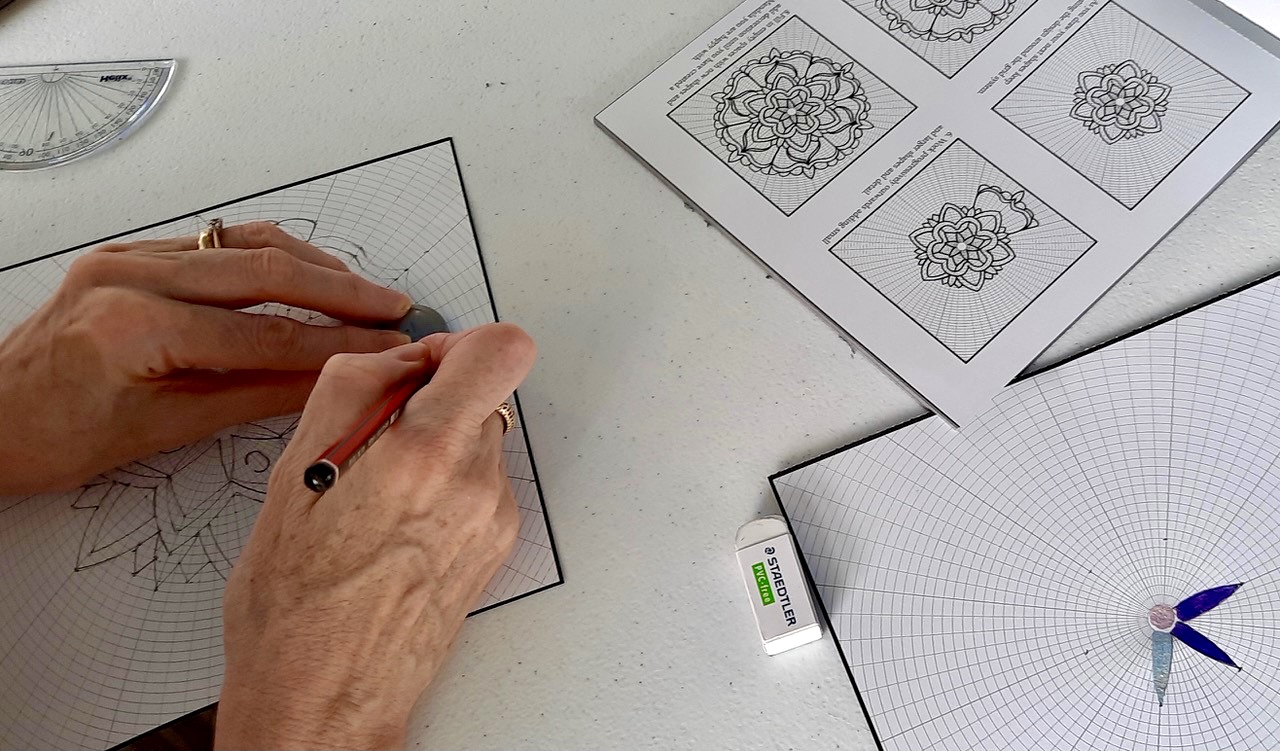 After the afternoon had elapsed, the lady added her initial to the design, one which she was really pleased with. Claire then showed her some of the generously donated Campbella watercolour paints, which the woman was enthusiastic to use in order to add colour to the piece. She intends to do this next week, using the shimmering paints in conjunction with coloured pencils. 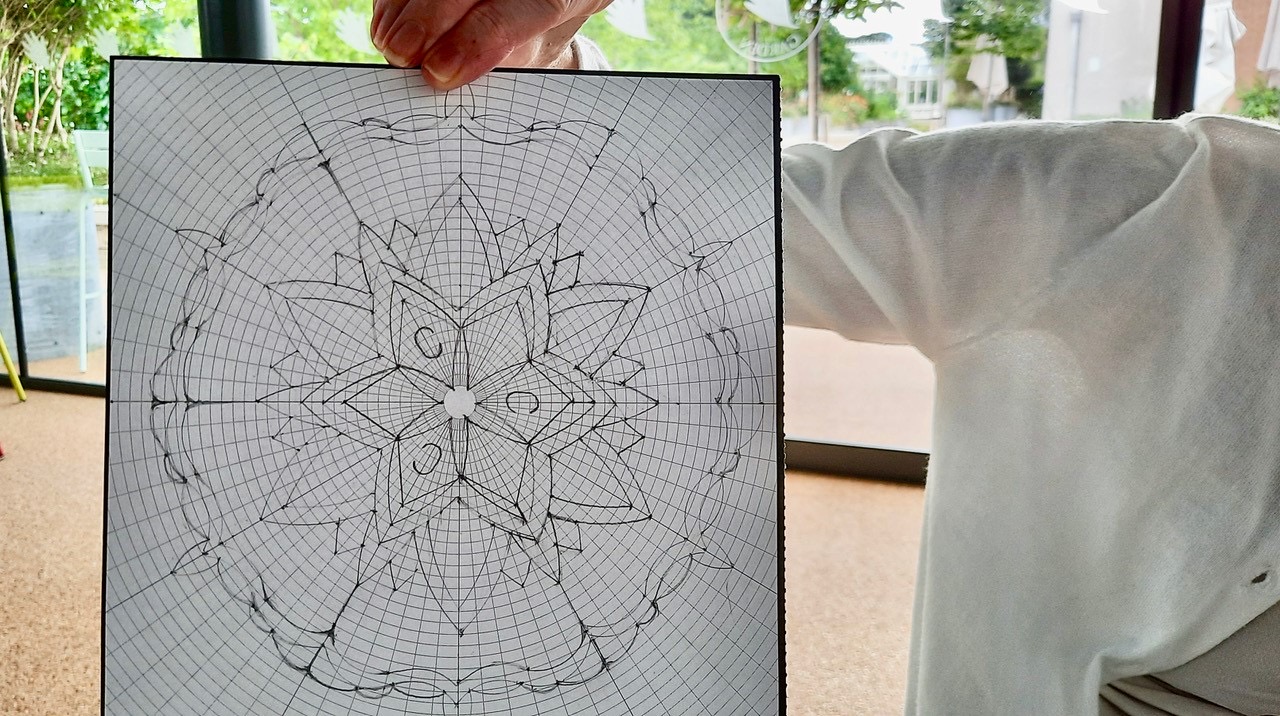 Meanwhile, Nawid and Claire worked through their initial ideas for their larger artwork, which reflects features of the Flower of Life mandala.

Whilst sketching, the two chatted and Nawid began to tell Claire more about his t-shirt business, Disfruta, a brand based around embracing a healthy lifestyle and enjoying fruit through clothing. It was this that inspired the two to add natural elements to their design, which will incorporate fruit (particularly watermelon, as there was some on the table as they painted), earth, sun and water. All four have great meaning to Nawid and therefore both agreed it was important to include them in their design.

Together they had a great time developing their ideas, with the plan now being to draw out the mandala on a large canvas next week. Claire and Nawid also decided to enhance their concept in their own time before then, meaning they will be able to begin using Claire’s vibrant acrylic paints as soon as she arrives on her next visit.

In the midst of the activity, Claire also spent time with the man who promised to introduce her to the apple art book, who came along to the group later in the afternoon. She really appreciated his thoughtfulness and savoured exploring the book with him. In return, she’s bringing a different book by the same artist with her on her next imminent trip to Oswestry. 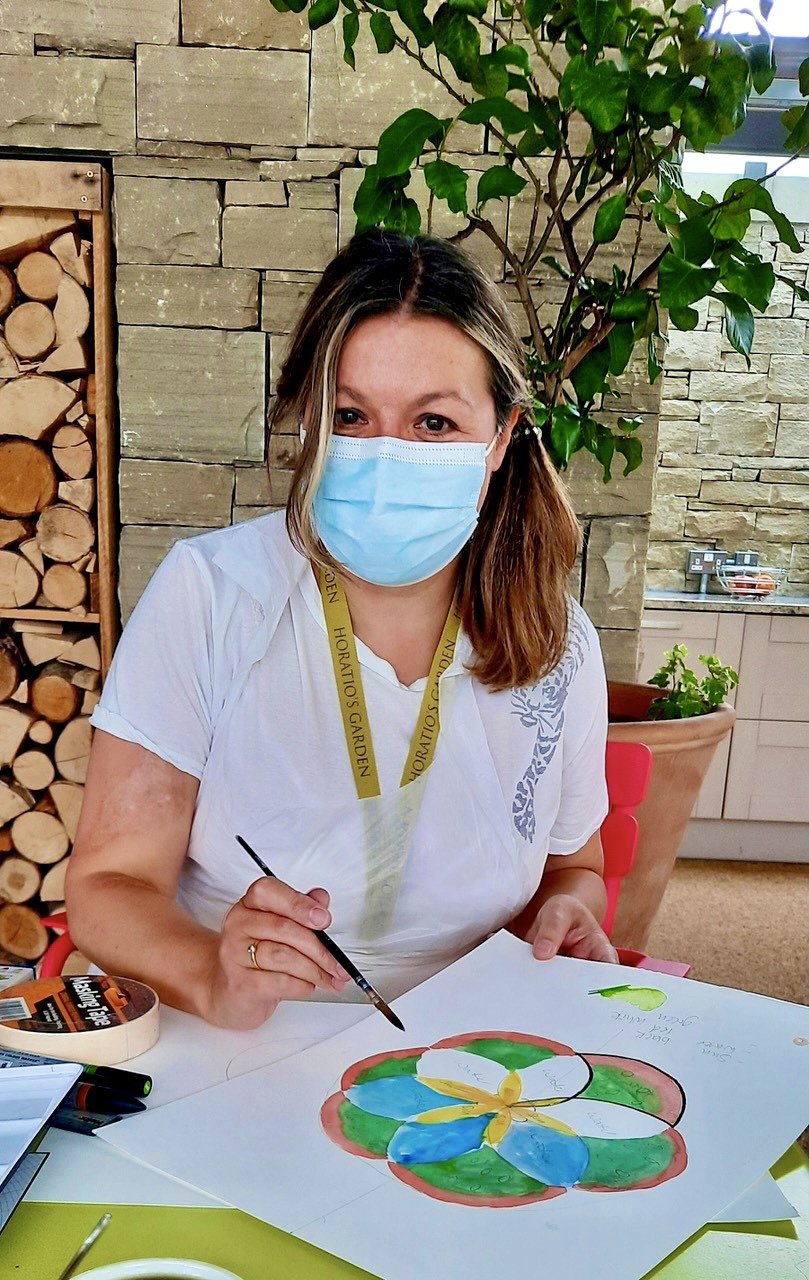 Besides those gathered, Claire saw plenty of other people relishing the garden too, including one lady who usually paints but who this week was happily in the company of her loved ones. She also encountered the man who has a passion for Ford Capris, with Claire intending to bring the likeness she’s already begun with her to the garden soon.

Everyone is really grateful to Claire for all that she’s doing in Horatio’s Garden, which she responds to by simply sharing how much she loves working alongside everyone. Claire continues to find being in the garden an absolute pleasure, expressing that it’s just fabulous to see patients enjoying the creative process. 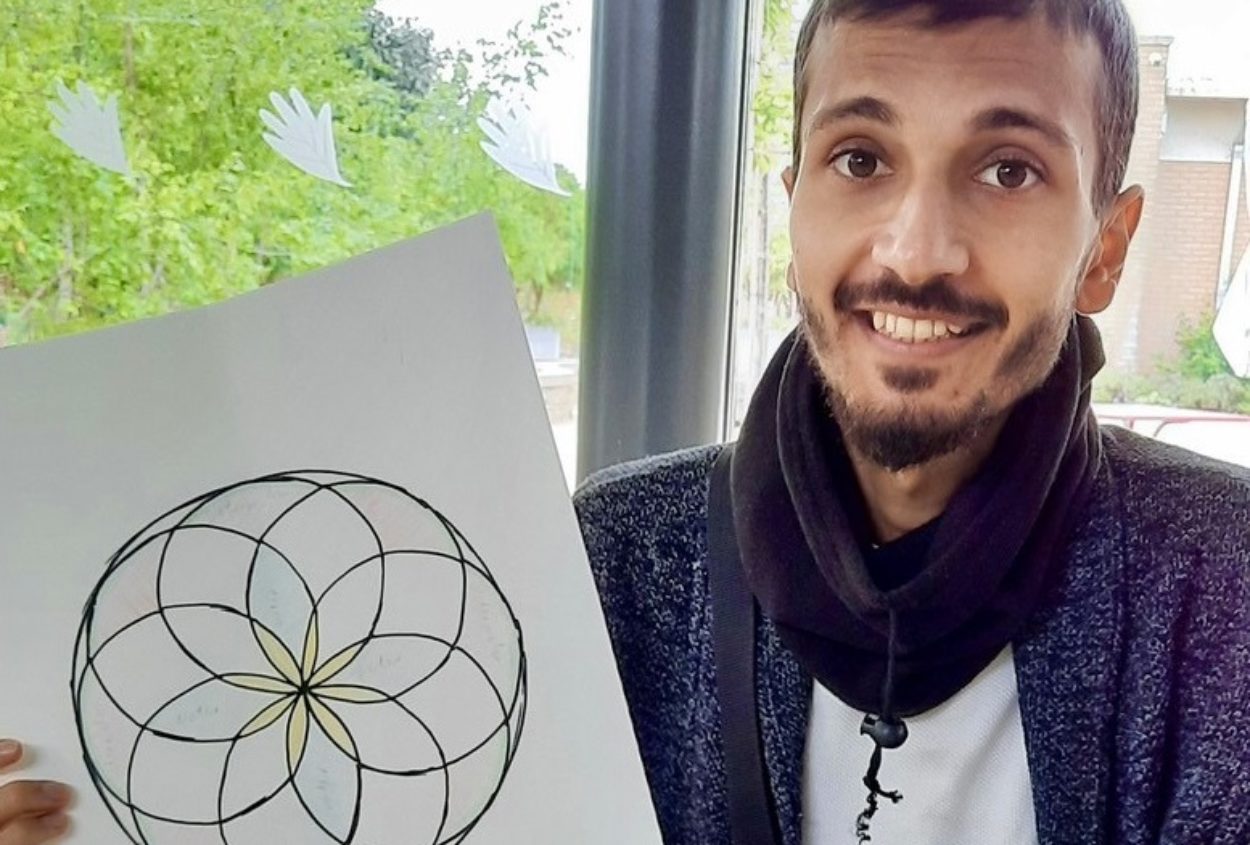 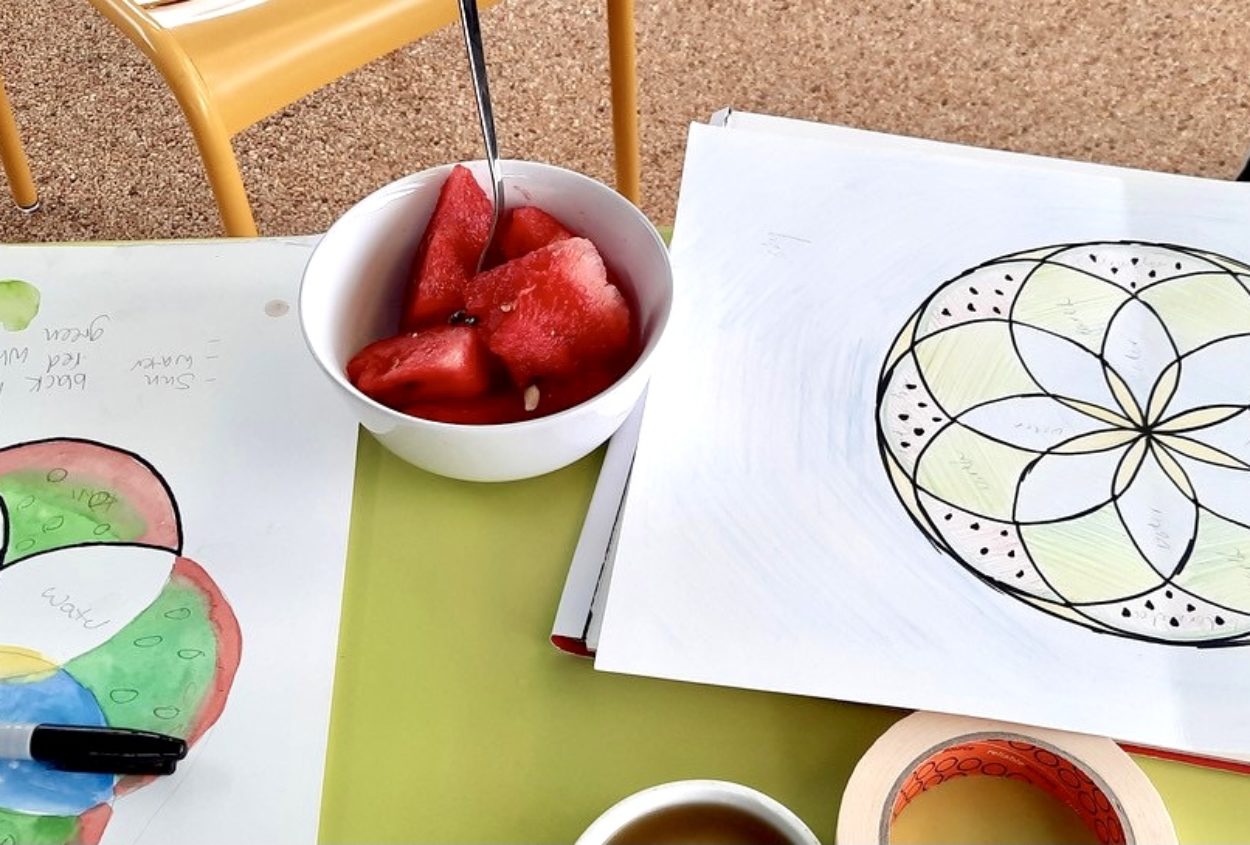 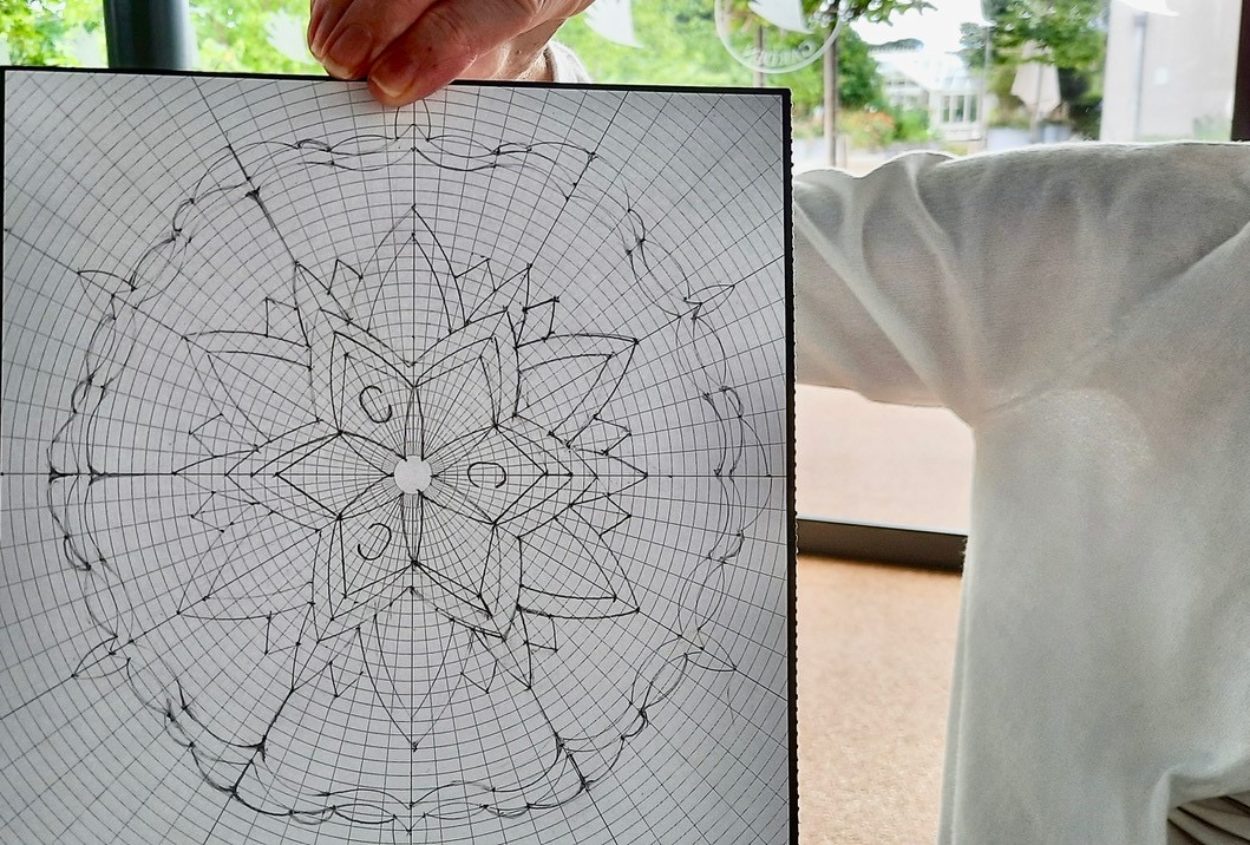 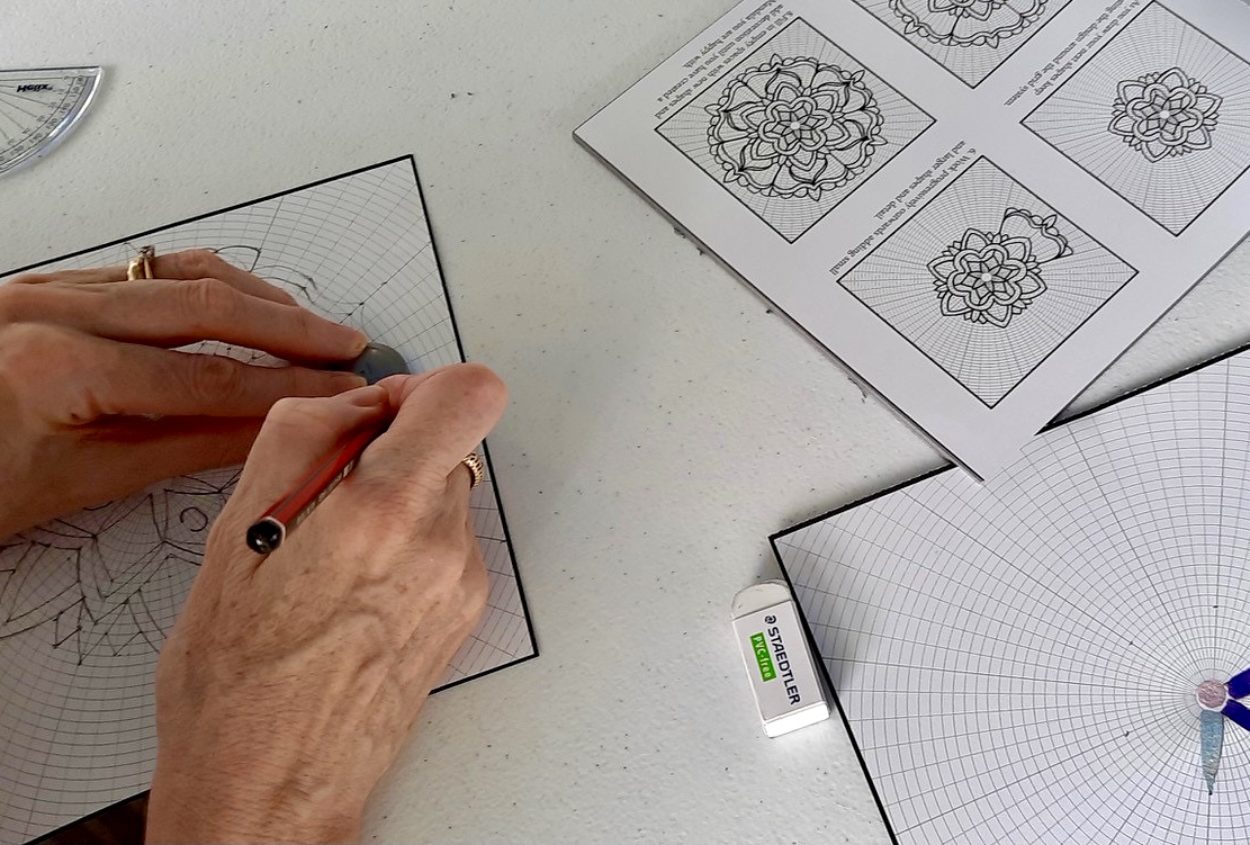 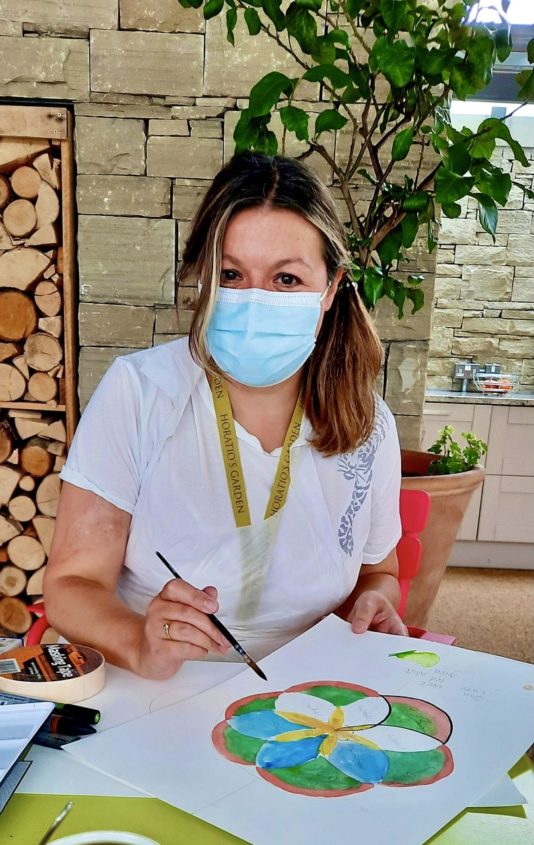 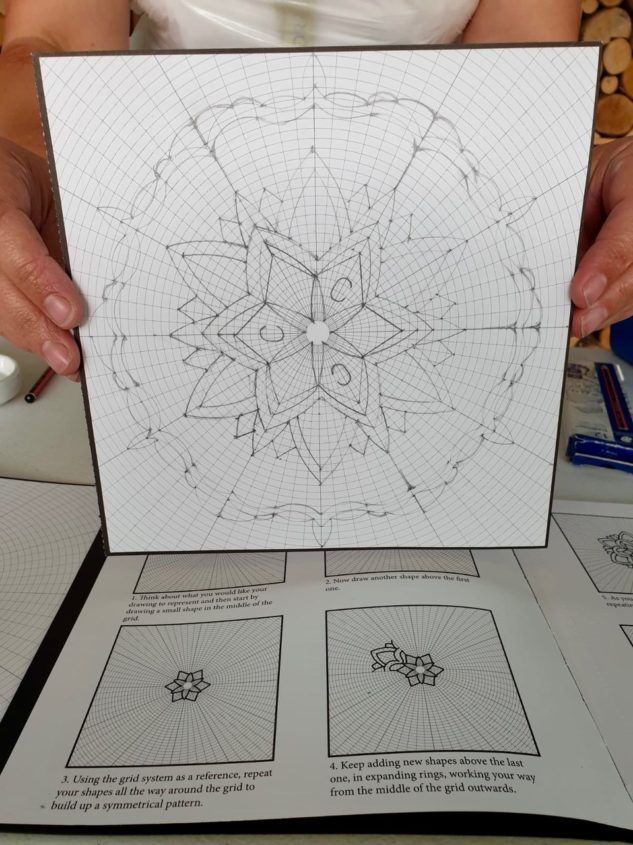 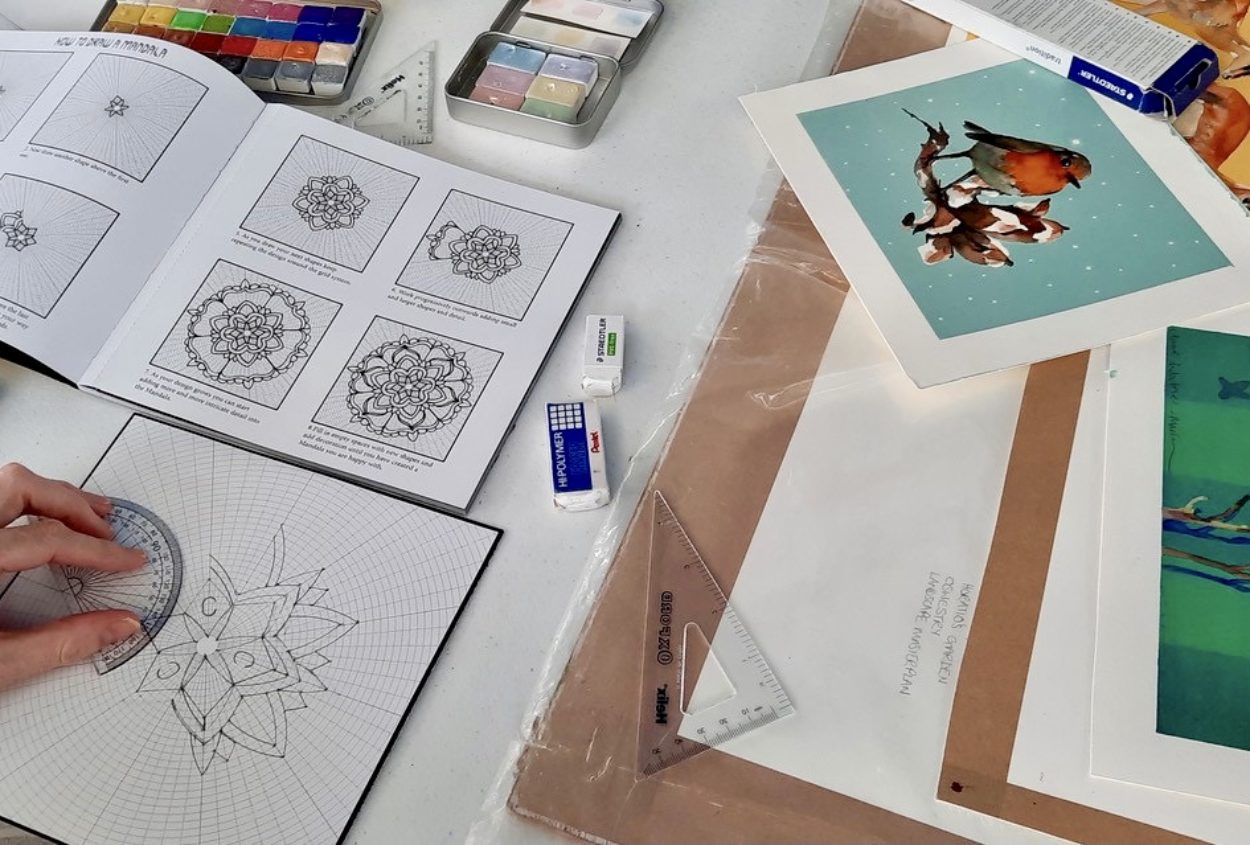 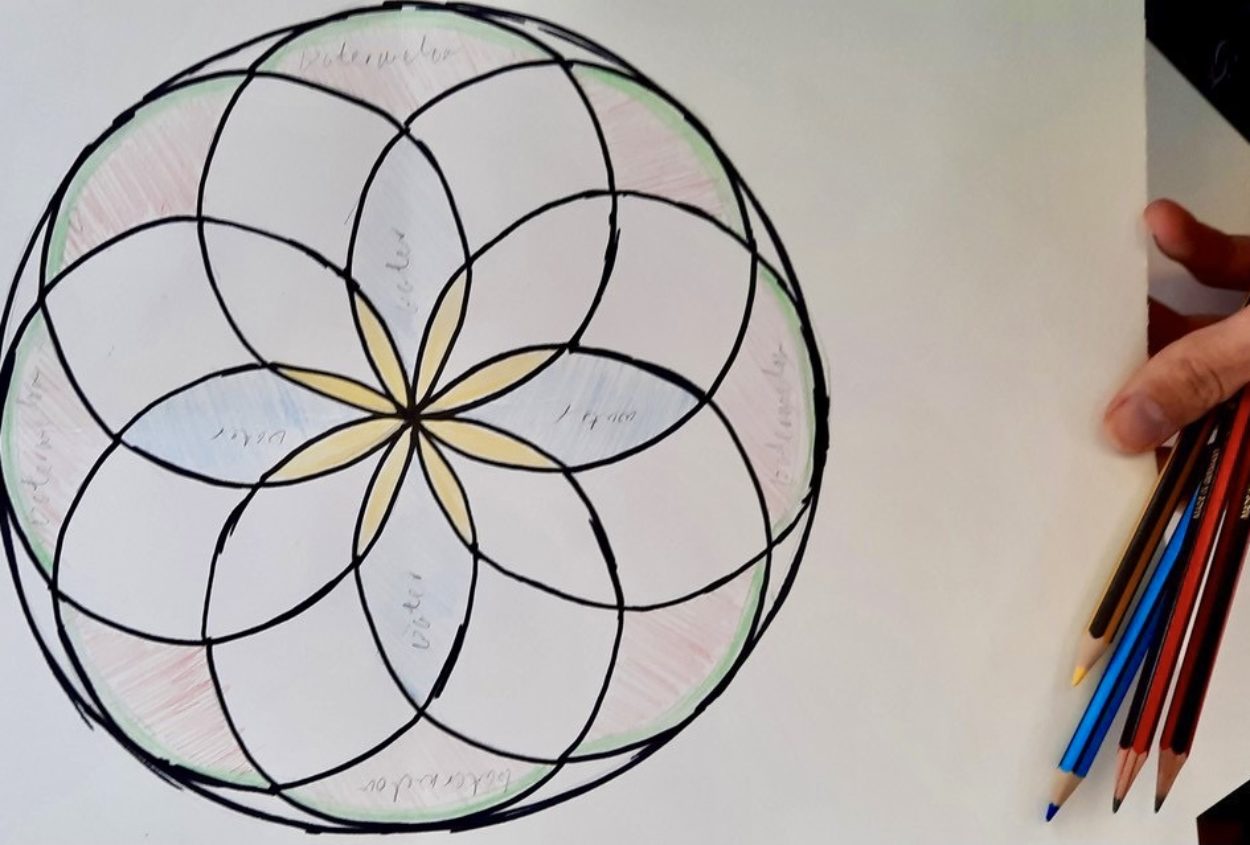 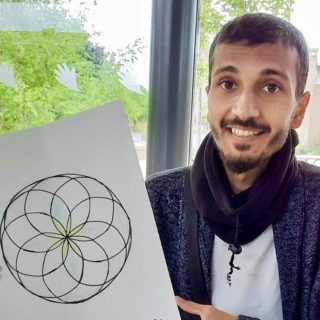 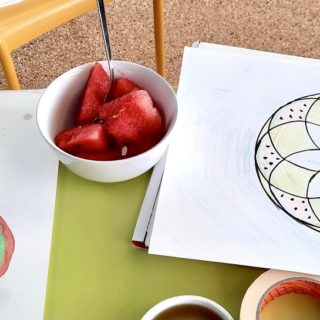 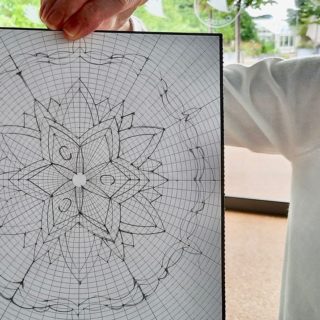 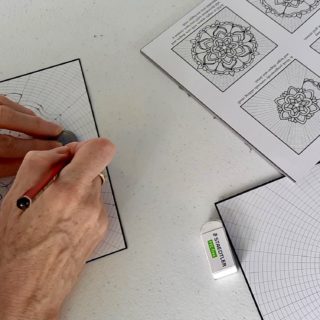 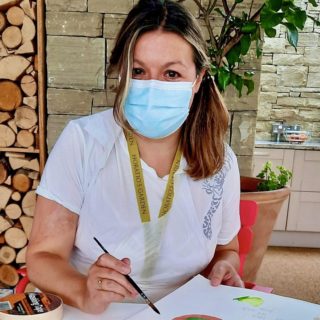 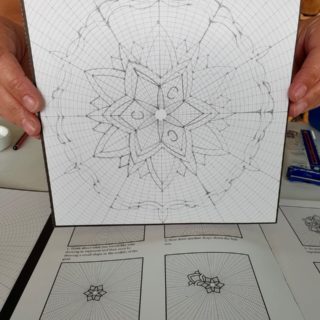 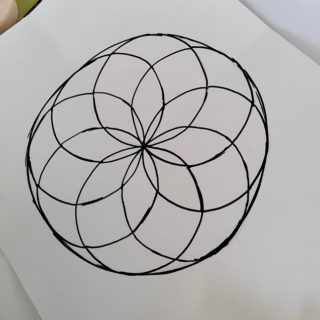 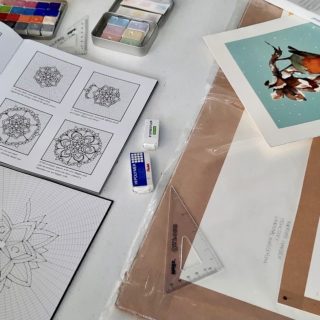 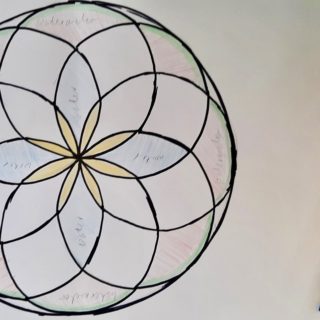