growing through lockdown, by chelsea lowe

Chelsea Lowe joined us almost exactly one year ago in Horatio’s Garden Scotland as part of the ‘Work and Retrain as a Gardener Scheme’ (WRAGS) run by the Women’s Farm and Garden Association (WFGA).

Her position was largely funded by The Finnis Scott Foundation, which was established under the Will of Lady Scott (Valerie Finnis) in 2006. In honour of her finishing her placement, Chelsea has written this beautiful piece about her final few, unprecedented months in Horatio’s Garden Scotland. As you will read, the kindness and generosity of The Finnis Scott Foundation, the brilliance of the WRAG Scheme and the relationship Chelsea built with all of us at Horatio’s Garden demonstrates how gardens can bring people together in numerous wonderful ways.

I’ve always found the Ides of March unsettling, even before reading Shakespeare’s Julius Caesar. This year found me messaging the Head Gardener at Horatio’s Garden Scotland, my mentor, Sallie Sillars, to tell her that I wouldn’t be able to come in as my daughter had a high fever. It was early enough then in the pandemic that people in the UK weren’t automatically thinking about self-isolation, but my husband and I had been following the guidance closely and we knew that our family would be staying home for the next 14 days, at least. It was still a week before schools would shut in the UK and lockdown would begin in earnest.

I watched from the sidelines for the next two weeks as Horatio’s Garden sent home it’s army of vibrant volunteers, and the Head Gardener packed the seeds and seedlings into her car to be nurtured carefully in her modest greenhouse at home, while PPE was fitted and decisions were made in the ward. I worked diligently at home, compiling plant information and photos for a visual guide to the garden which I had proposed to undertake at the last volunteer meeting. By the time I was out of self-isolation, the ward had been closed to visitors and only the Head Gardener was able to attend the garden, solely shouldering a workload normally spread out between us and 20+ energetic volunteers.

By the first week of April new routines had established, and with all the safety precautions in place – hand sanitiser at entrances, physical distancing observed, and masks at the ready – I was allowed to walk back through that humble magic gate that encloses such a transformative and visceral garden.

So much had changed in a few short weeks, in the world we lived in but also in the woodland. Spring was in full swing and amongst the nodding heads of the fritillaries and the fresh shining faces of the narcissus, you could briefly forget that the world had been knocked sideways. It had been a very dry spring for Scotland and much of the time in the garden for the next few weeks was focused on watering. To minimise watering time and maximise plant health, everything that could be planted out was put into the ground. The greenhouse, which was bursting at the seams in early March, was eerily empty of seedlings. Although I adore working alone in the green zen of the garden, coffee breaks distinctly lacked the warmth and camaraderie of Sallie and the volunteers squeezed merrily into the cabin. I sent photos out via the group chat so that the volunteers could see the garden blooming, but also for the human connection now missing.

I feel thankful that in these last months of my mentorship, Sallie trusts me to tackle the giant to-do list independently, and that she makes herself constantly available via chat and phone when there is something I want to talk through. Even in the garden, technology is facilitating teaching, learning, and connection. It’s not yet clear when the volunteers may be able to return, so Sallie and I are making the most of our time in the garden, even though we cannot be there at the same time.

With the charity’s main fundraising events cancelled, it has been uplifting as well to witness and participate in grassroots fundraising efforts, such as the Horatio’s Garden Grow To Give campaign. My own daughter, now homeschooling, planted sunflowers and divided plants with me to give away in the neighbourhood to raise awareness and much-needed money. Although I had very much been looking forward to designer James Alexander-Sinclair’s spring visit to Horatio’s Scotland, seeing the videos of such horticultural high-fliers broadcasting tips, tricks and well wishes from their own gardens has brought humour and normalcy to the new workday.

I am very proud to be able to contribute to such an invaluable place at such an unprecedented time. With visitors not allowed on the wards and anxiety running high, the garden’s role as a sanctuary for staff and patients is even more crucial. It provides much-needed space for reflection and distancing, it is a buffer to the clinical environment, now even more fraught, and it marks time in a gentle and beautiful way.

In April, one of the Horatio’s Garden volunteers, Archie Campbell, generously came in to play the bagpipes as part of a VE Day commemoration and Clap for Carers event. In the stunning courtyard garden that evening, surrounded by tulips and respectfully distanced patients and staff of the Queen Elizabeth National Spinal Injuries Unit, Flowers of Scotland floating through the air, I could tell everyone was smiling, despite the masks.

Chelsea will be sorely missed by Sallie, Yvonne, the Horatio’s Garden Scotland volunteer team and everyone involved with the charity. She has done a fantastic job over the past year and we have no doubt that she has a very bright future ahead of her! 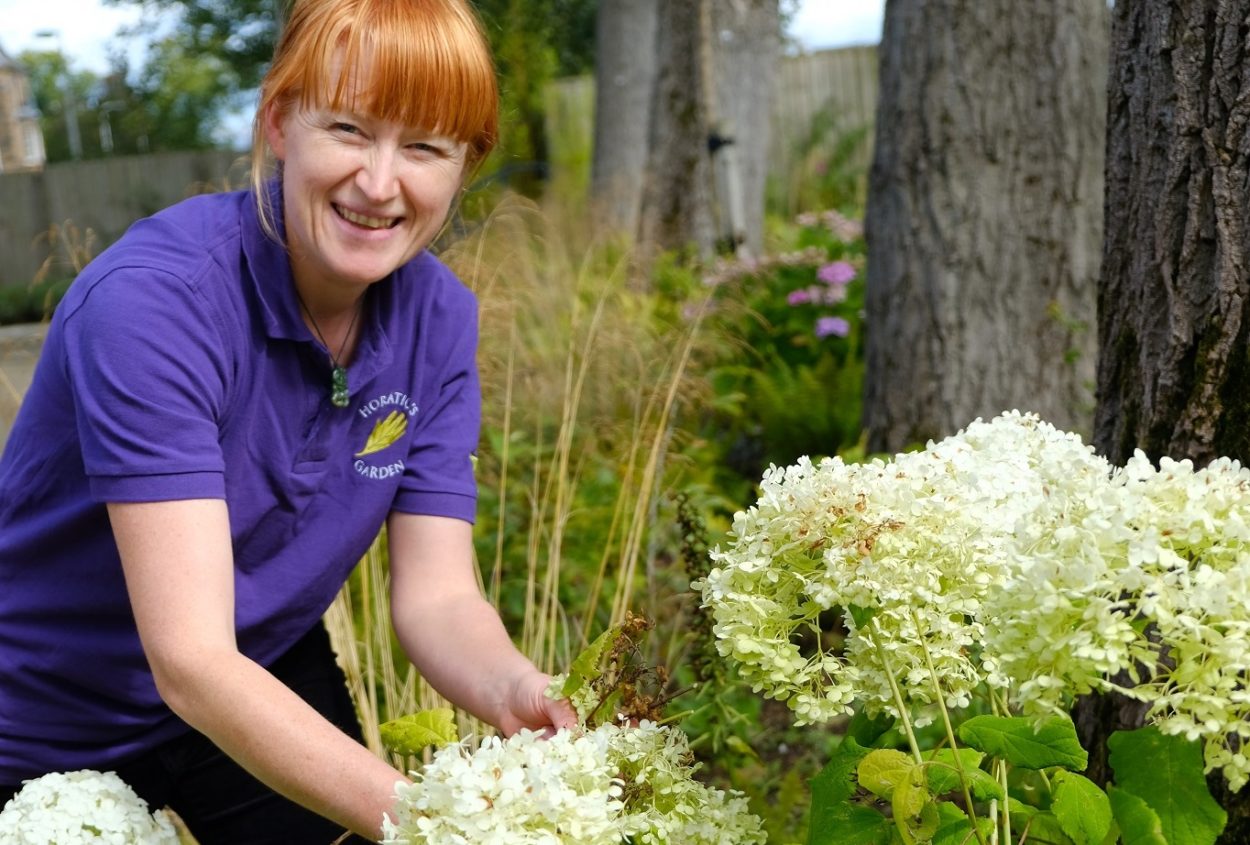 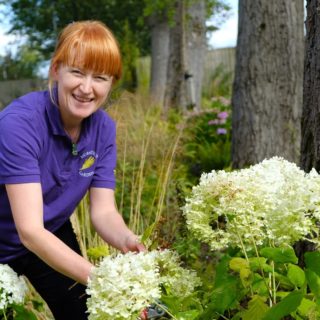