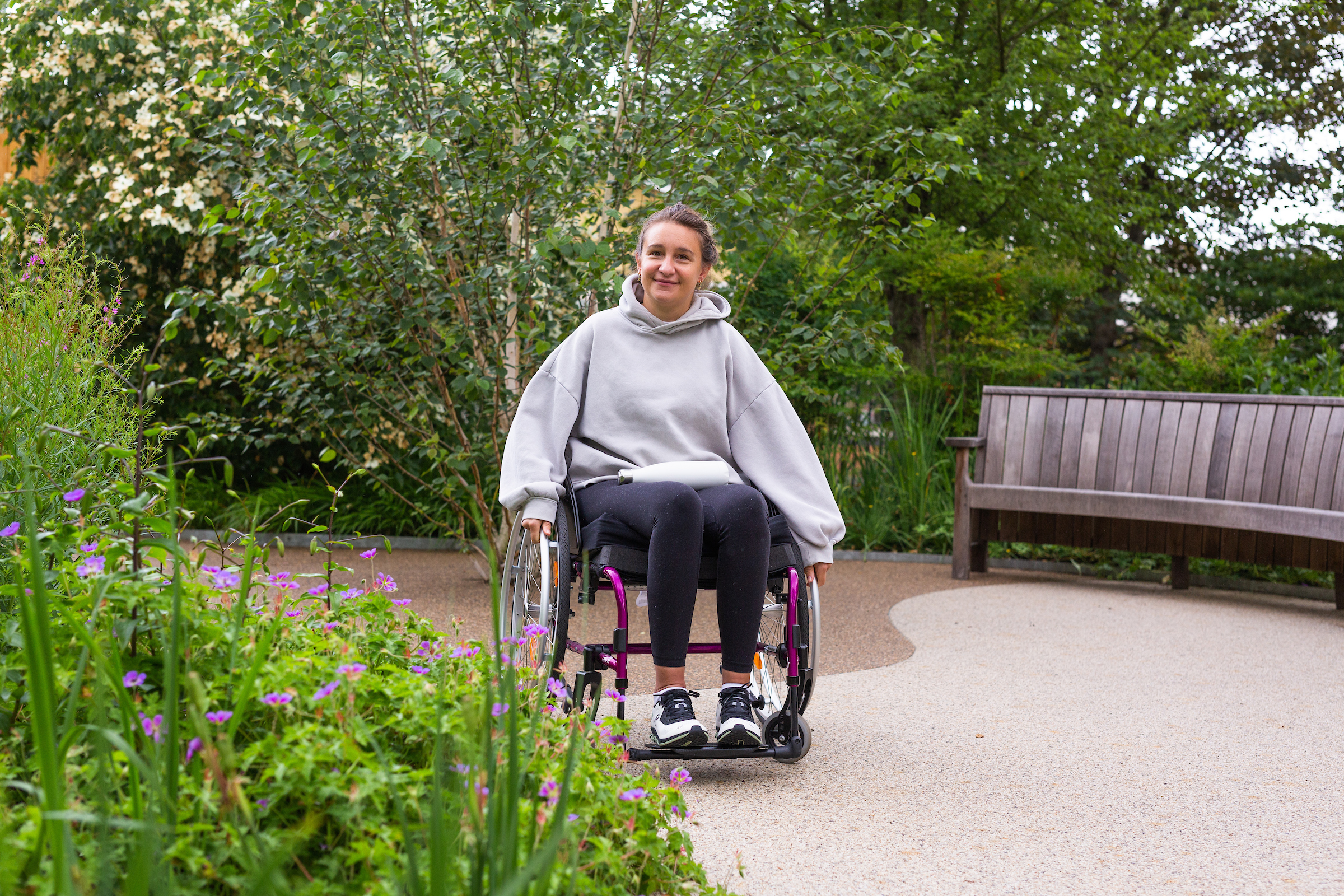 At 36 years old, she’d previously studied law in France and the UK for nine years. Whilst she began work as a M&A Senior Paralegal, she decided to leave law before qualifying as a solicitor, instead pursuing a career as a Financial Crime Consultant investigating money laundering and terrorist financing in the UK and other jurisdictions.

Being self-employed, Charlotte found she had the time to explore other intriguing avenues too, dedicating her spare moments to freelance photography and to training as a yoga teacher.

Initially, she had planned to spend just 10 days in Costa Rica, but after falling in love with the country on arrival, she ended up staying for three months. Sharing her skills as a yoga teacher in exchange for free accommodation, Charlotte was the happiest she had ever been.

Enjoying her time away from a London in lockdown, Charlotte awoke at 5am as usual, deciding to go surfing to make the most of the sunrise.

“I got on my quad and put my helmet on. There was a lot of wind that day. In hindsight, I don’t think the helmet was on properly. The next thing I know, I had accelerated into a curve.”

Minutes later, Charlotte was face down in the jungle.

She was paralysed before sunrise.

After being rushed to hospital, she discovered that the crash had shattered the bone in her back to pieces. She couldn’t feel her legs and after two surgeries, she found out she had suffered an L2 incomplete spinal cord injury.

“I was in so much pain. Everything was so difficult for me, but I was treated with immense care by all the doctors and nurses.”

Following her month in hospital in Costa Rica, Charlotte was flown back to the UK. She spent a further month at the Royal London Hospital, where someone who didn’t work at the hospital told her that she ‘should get used to living in a wheelchair.’

“I was just depressed.”

Coronavirus restrictions meant that Charlotte was in isolation for seven days. Her depression began to worsen, but fortunately her nurses noticed and as soon as they were able, they immediately encouraged her to venture to Horatio’s Garden.

“As soon as I was out of isolation, I used the garden every day! Whenever I wasn’t in physio at the gym or with doctors, I was in the garden.” 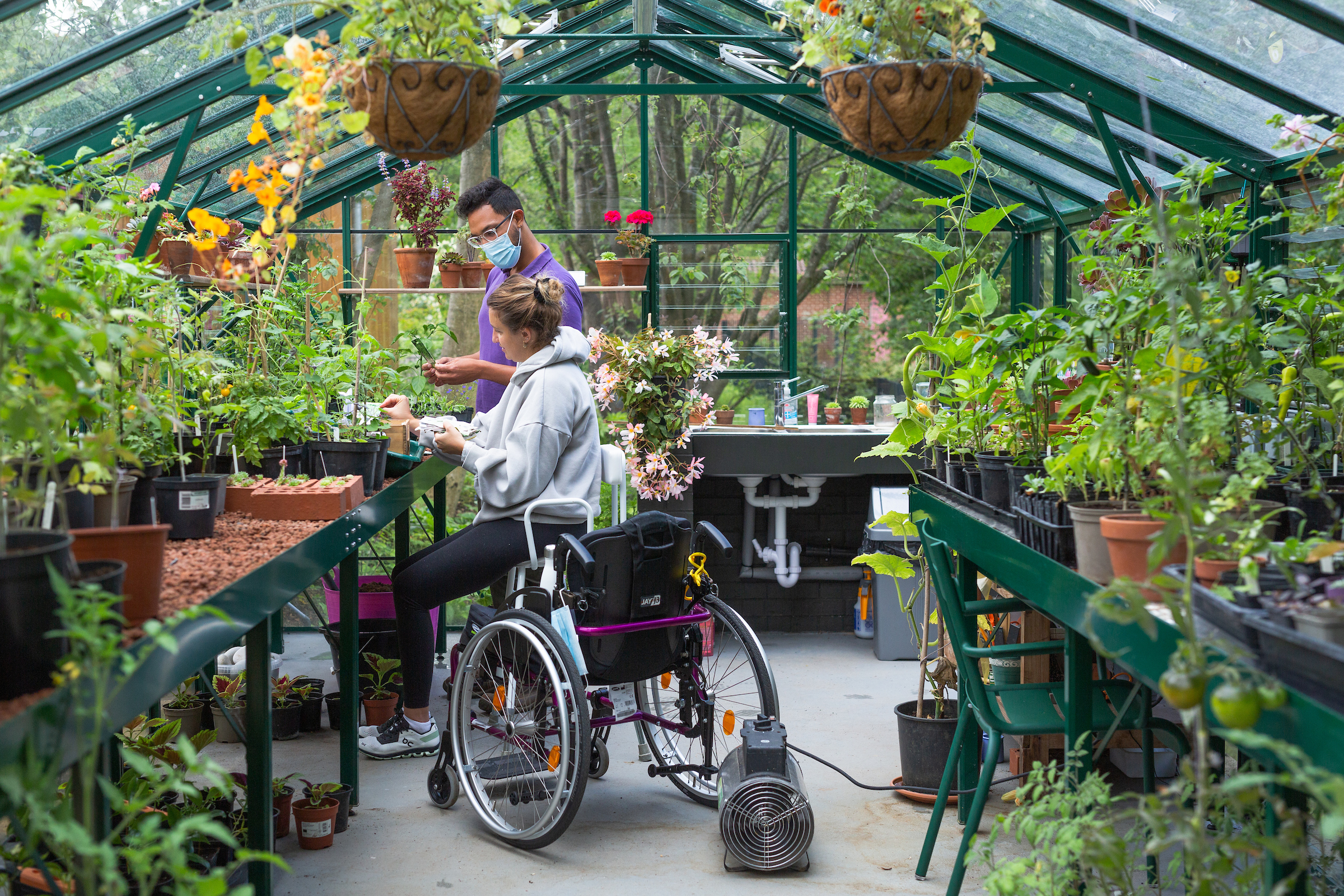 “I would have all the meals I could in the garden in the sun, or in the pods during the evenings. On weekends, my friends would come and sit with me and admire this beautiful space. They were amazing, especially as I couldn’t see my family as they don’t live in the UK.”

Charlotte got to know many of the volunteers through simply spending time in the garden and she discovered the sanctuary had an impact on NHS staff too.

“All the volunteers are very kind and always up for a chat, or offering cakes and biscuits! It puts everyone, including the nurses, doctors and physios in a better mood. We all just love seeing people out and about in the garden.”

As well as being a place to simply escape to and be amongst the colourful, textured planting, Charlotte soon began to regularly join Head Gardener Ashley for horticultural therapy sessions.

Having never done a great deal with plants before, Charlotte discovered that she loved actively using the garden. She began to get really involved with the gardening activities, as well as the creative workshops that Ashley and the volunteer team offered.

Her passion for gardening truly started to blossom and she soon decided to concentrate on growing cherry tomatoes. In between her workshops, she’d water and tend her collection, with Ashley always on hand to offer advice.

“We started with a plant that was almost dead. It had two really sad leaves and nothing else. We tried to just consistently spray it with water once a week and eventually, we helped it come back to life.” 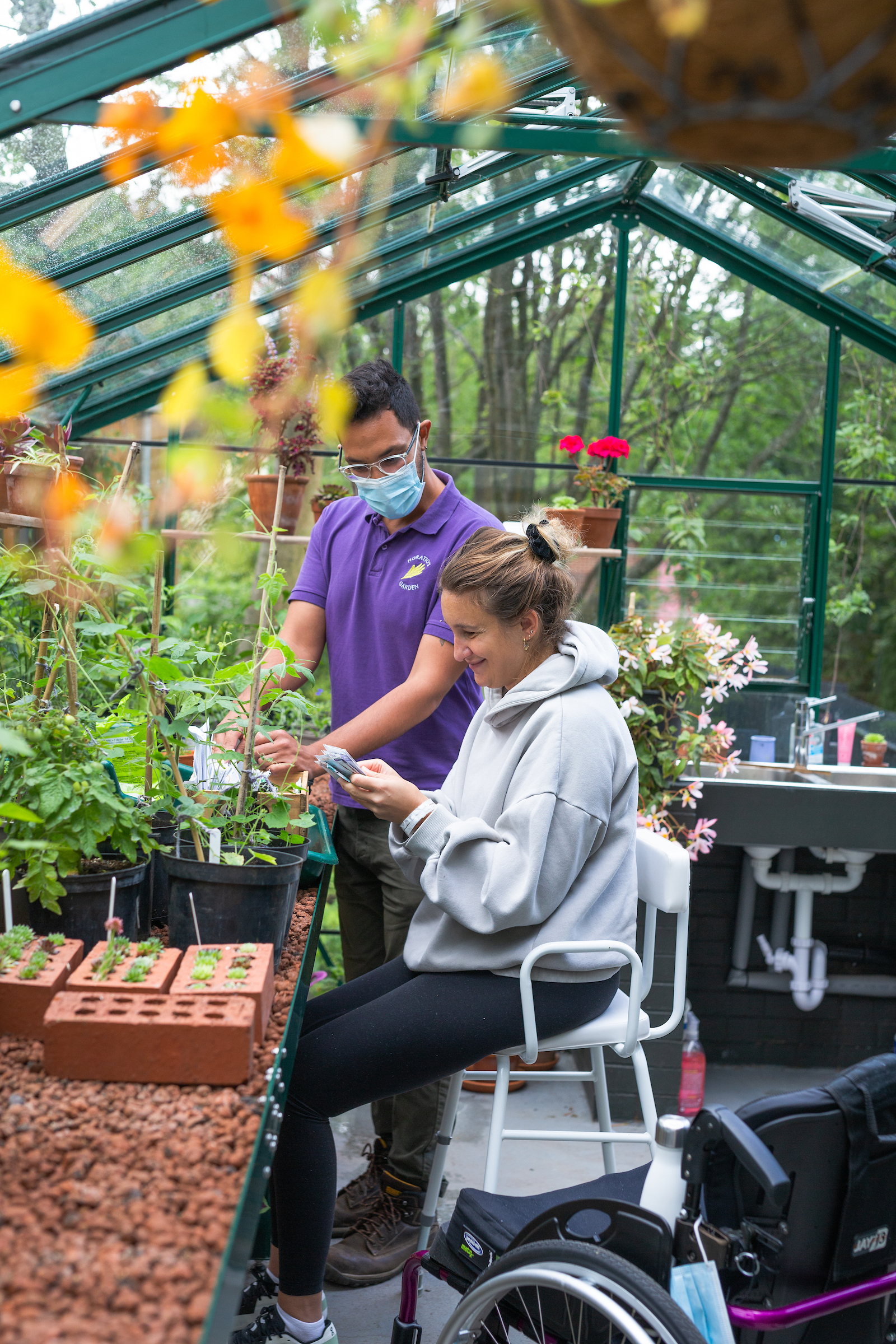 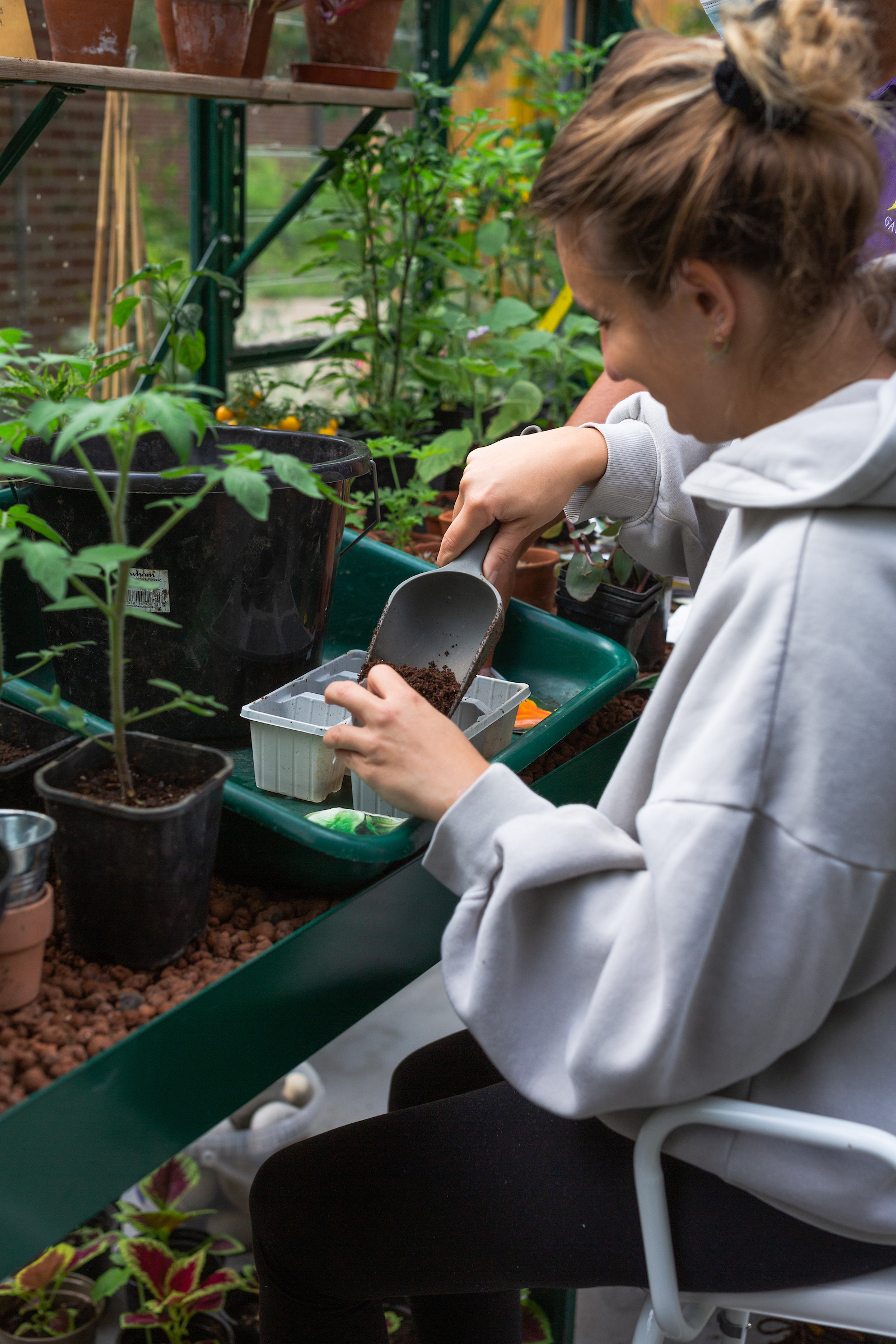 Her initial encounter with the power of plants got her thinking about their strength.

“I think that they can always come back; if they can be that resilient then so can we! It’s just amazing what nature can do. It’s very inspiring and I think it can make all of us try and make us able to push through difficulties.”

With the help of her plants and Horatio’s Garden, Charlotte’s mindset started to shift, something that made a difference to her physical and mental rehabilitation. Gardening gave her a way to not only improve her fine motor skills, but also offered a vital sense of calm and hope.

“The way you hold a leaf or the way you touch a plant, you have to be really careful. They’re soft and fragile. It’s therapeutic and just nice to escape; you forget about your worries.”

As Charlotte’s tomato plants started to increase in size, repotting became her priority. With the bigger pots giving the small plants room to grow, she found that there were parallels between her life and the life of her plants, a metaphor which encouraged her to think positively.

“Hopefully I will be able to walk. It’s nice now to be told that I will. All of that’s down to what I have done here so far in terms of Occupational Therapy and my work here in the garden.” 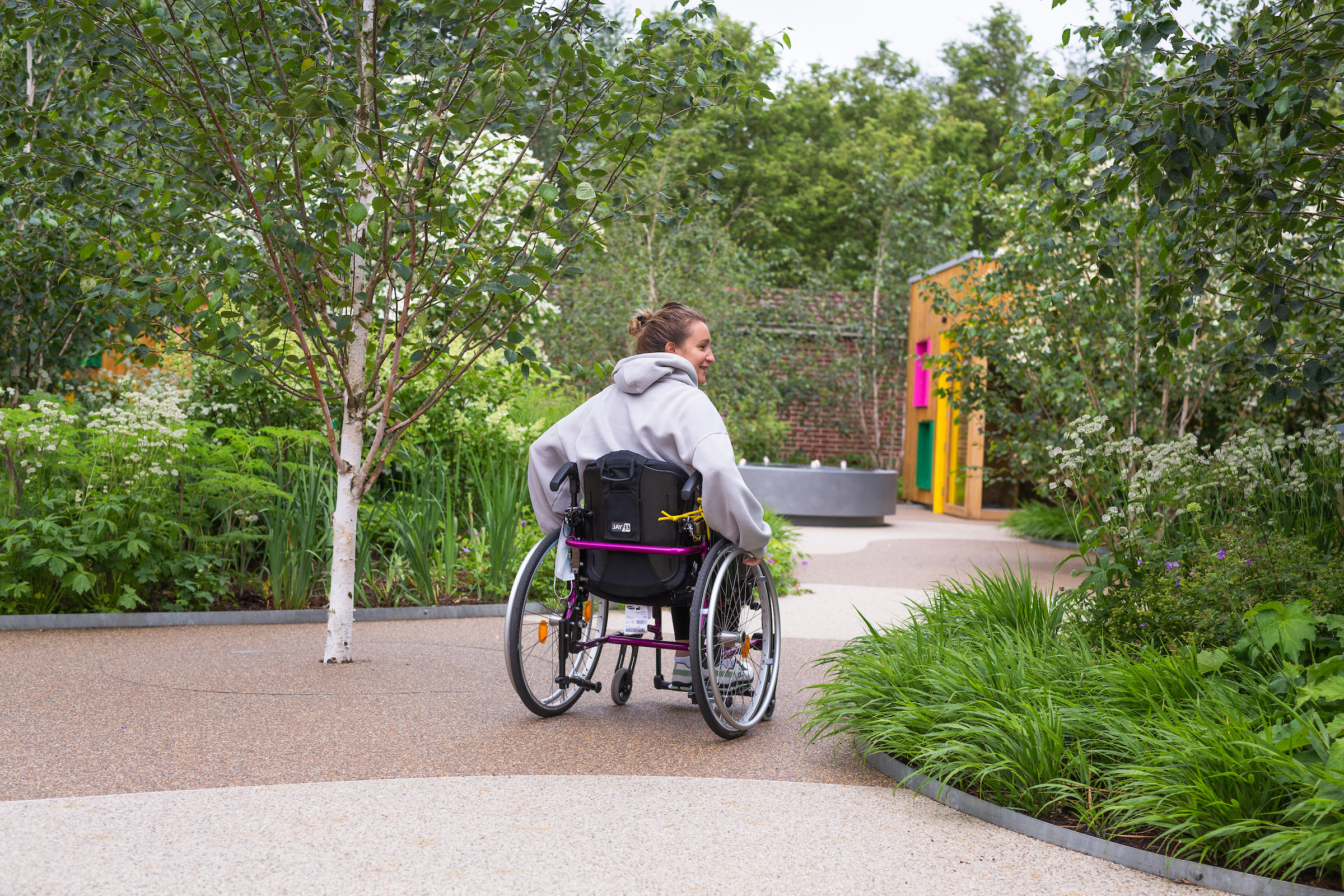 Charlotte’s hours spent in the garden gave her the time and space she needed to reflect.

Now, her quiet contemplation of the past has helped her to focus on the future; a future that Horatio’s Garden will always be a part of.

“Looking back on my time in the garden, I’ll always remember eating my homegrown tomatoes for lunch. I had so many in 11 weeks I actually haven’t eaten any since!”

“I also loved my wheelchair skills training with my hilarious Occupational Therapist Brittany. The garden was the perfect place for that and we always put on a bit of a show to give those around us something to laugh about!” 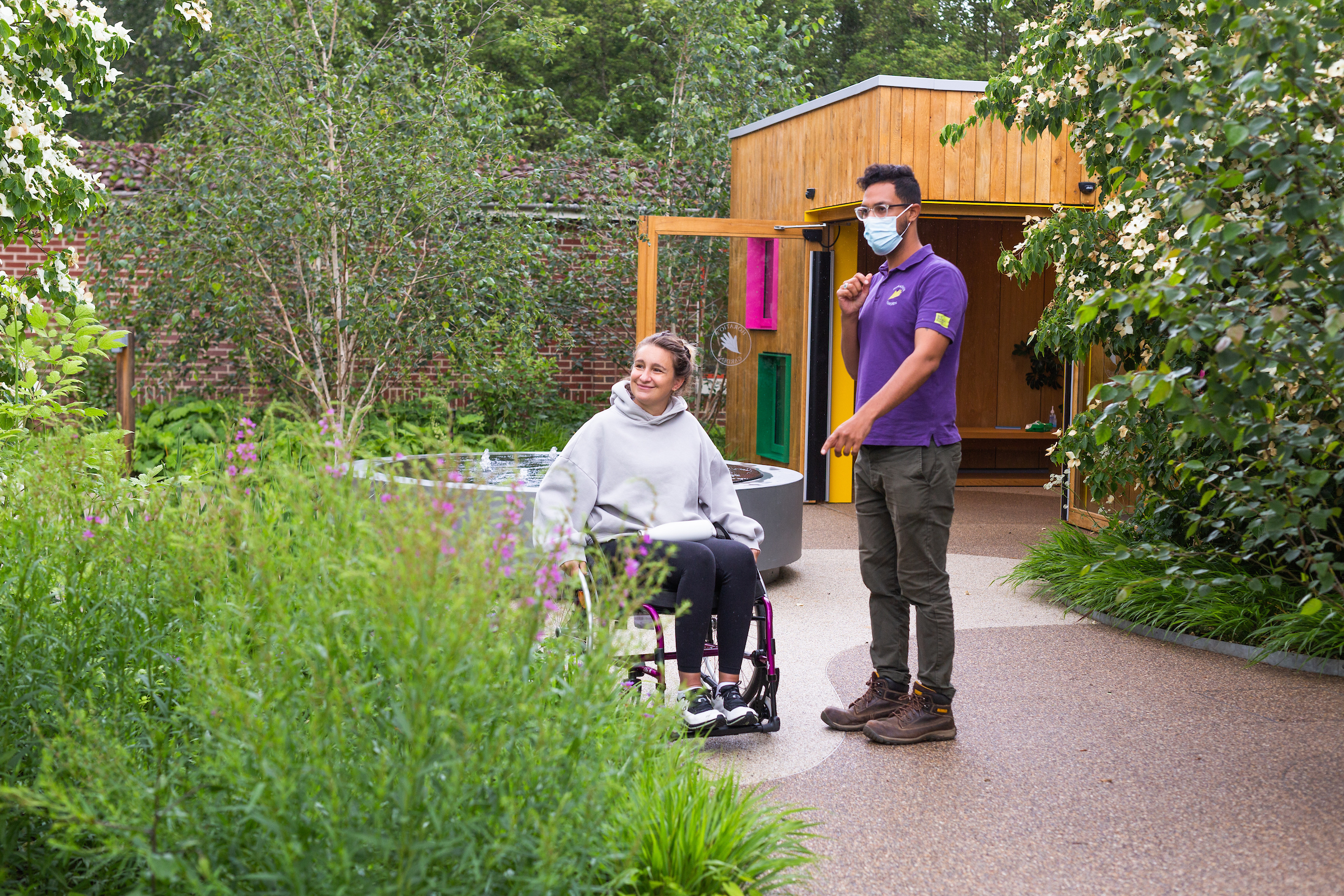 Since leaving the LSCIC, Charlotte’s rehabilitation has continued.

“I am walking again! I was only moving a bit of one foot and leg when I arrived at the LSCIC. When I left, I was on two feet with sticks.”

Whilst her life may have changed, Charlotte’s instinct for fun and adventure hasn’t.

“Most importantly for me, I went surfing again. I returned to Costa Rica, travelling alone despite the challenges, and surfed with the National Champion of Adaptive Surfing out there.”

“I’ve also received the amazing news that the foundation, Millimetres 2 Mountains, have accepted me as a beneficiary. So hopefully next year I will be climbing mountains and surfing constantly!”

“In the long term, I might even move back to France and open a retreat centre for all, but particularly to help people recover from spinal injuries using yoga and surfing as rehabilitation.”

When asked what she would say to her newly injured self, she replies:

“You did it. You got this really bad injury, but you didn’t stop trying to push forward and walk again. You did it. I’d be pretty proud – if you did that, you can pretty much do anything.”

“I’m so glad I didn’t give up and the garden helped me so much. It gave me something to do. The healing power of nature is so important.” 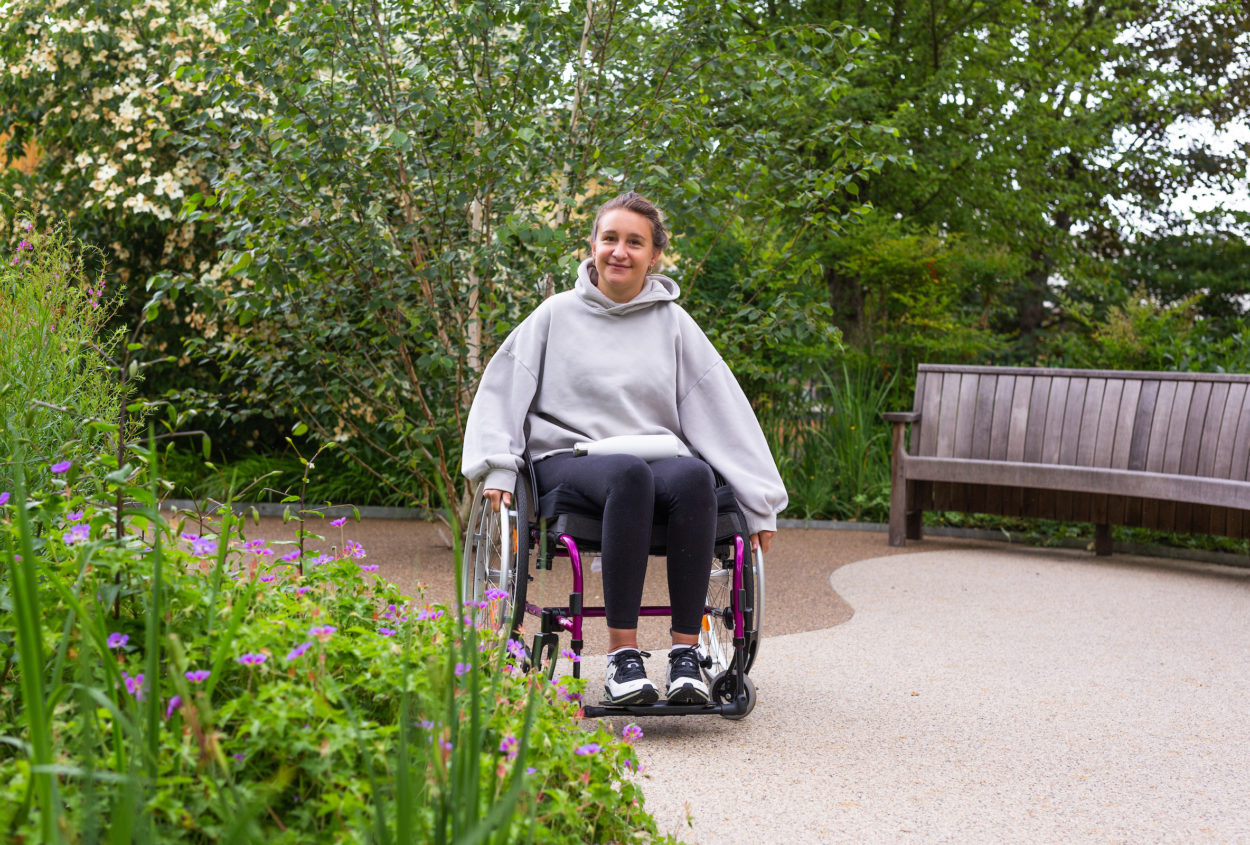 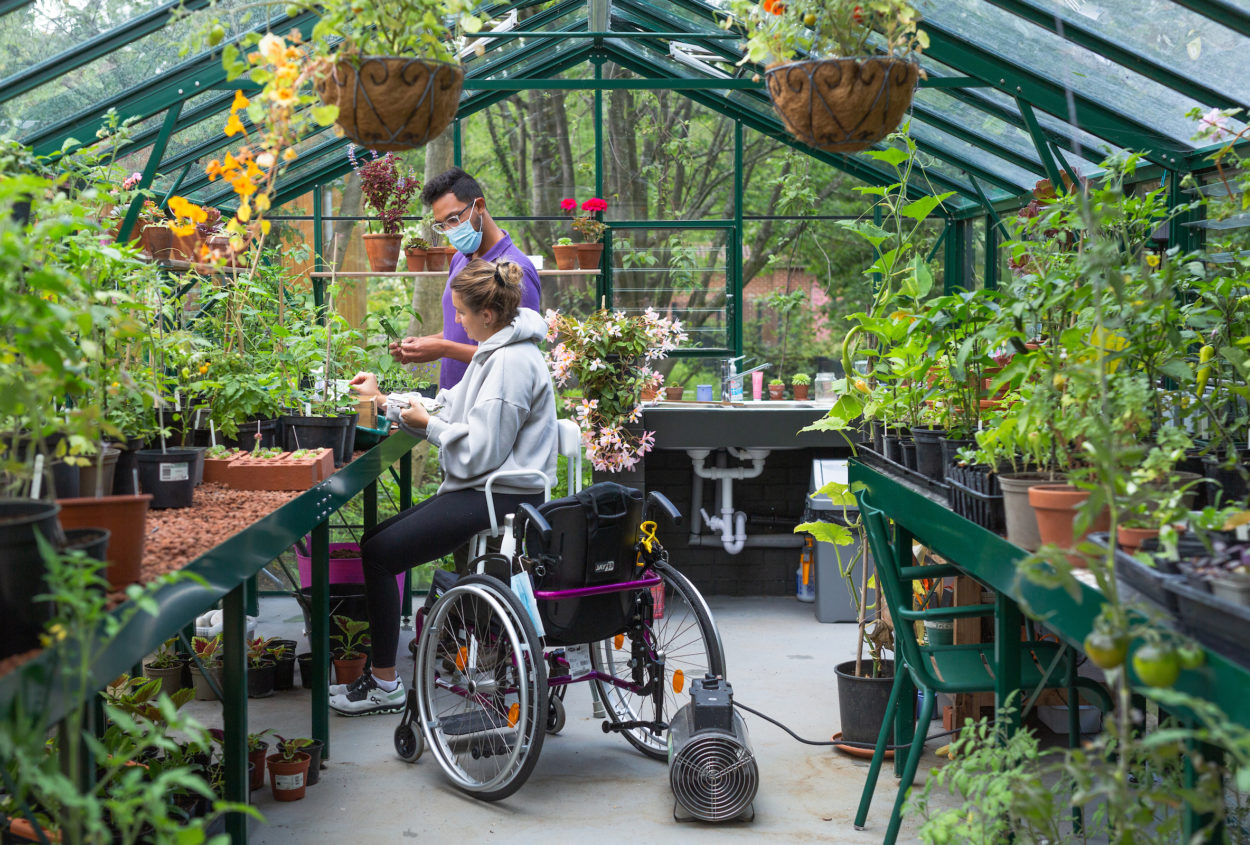 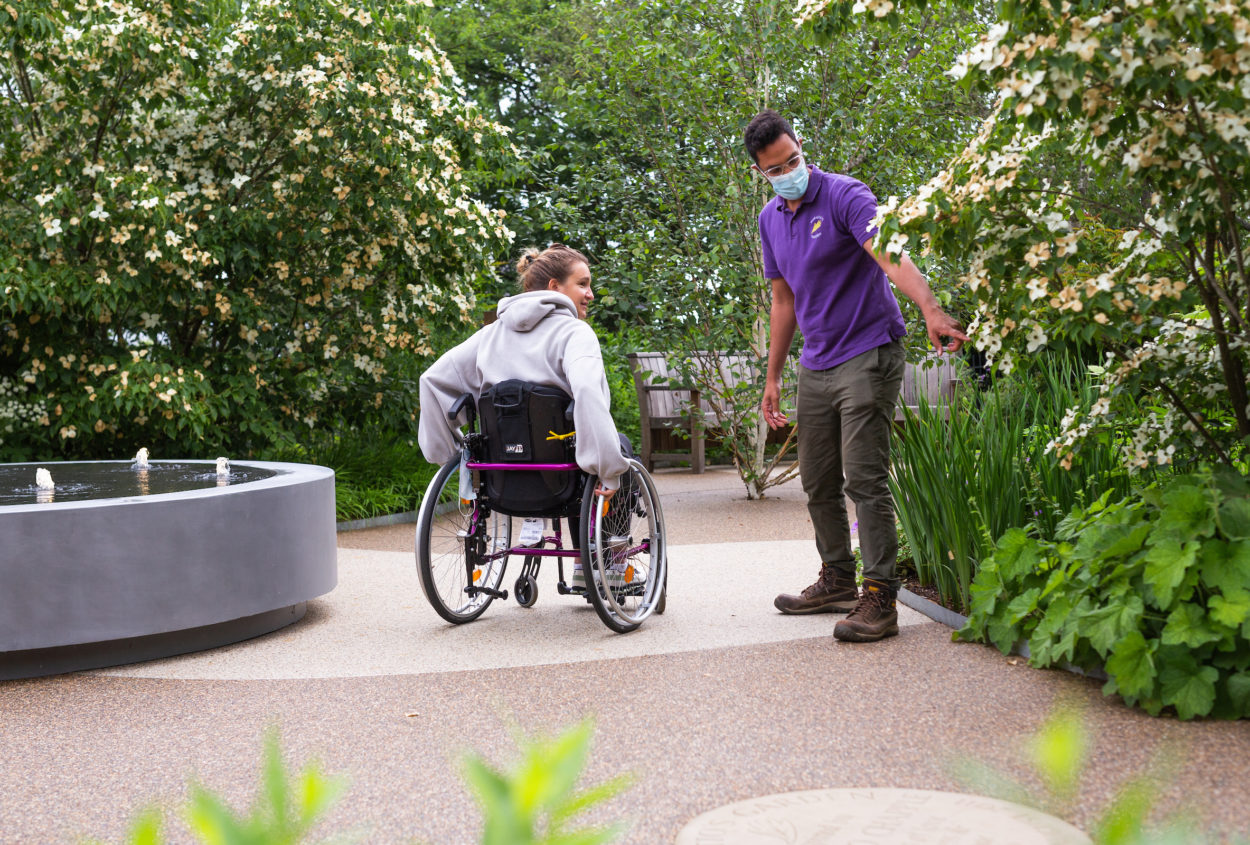 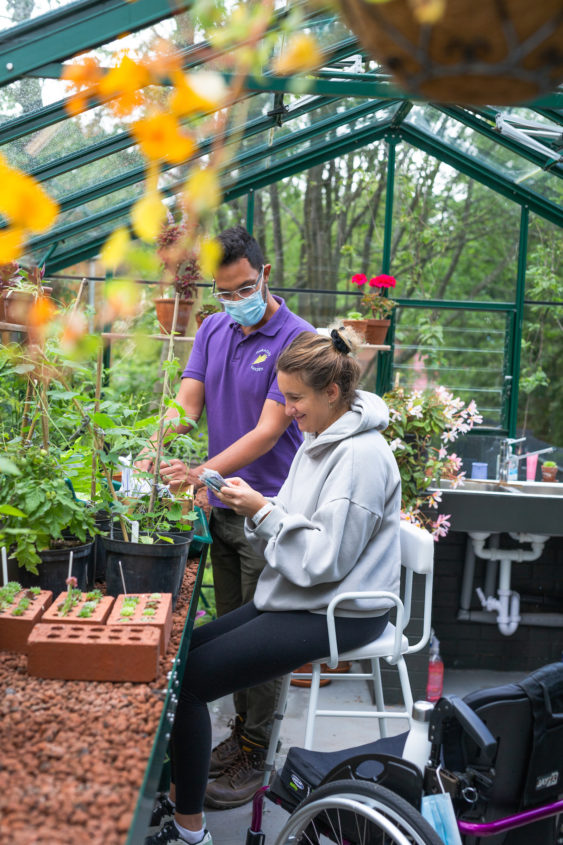 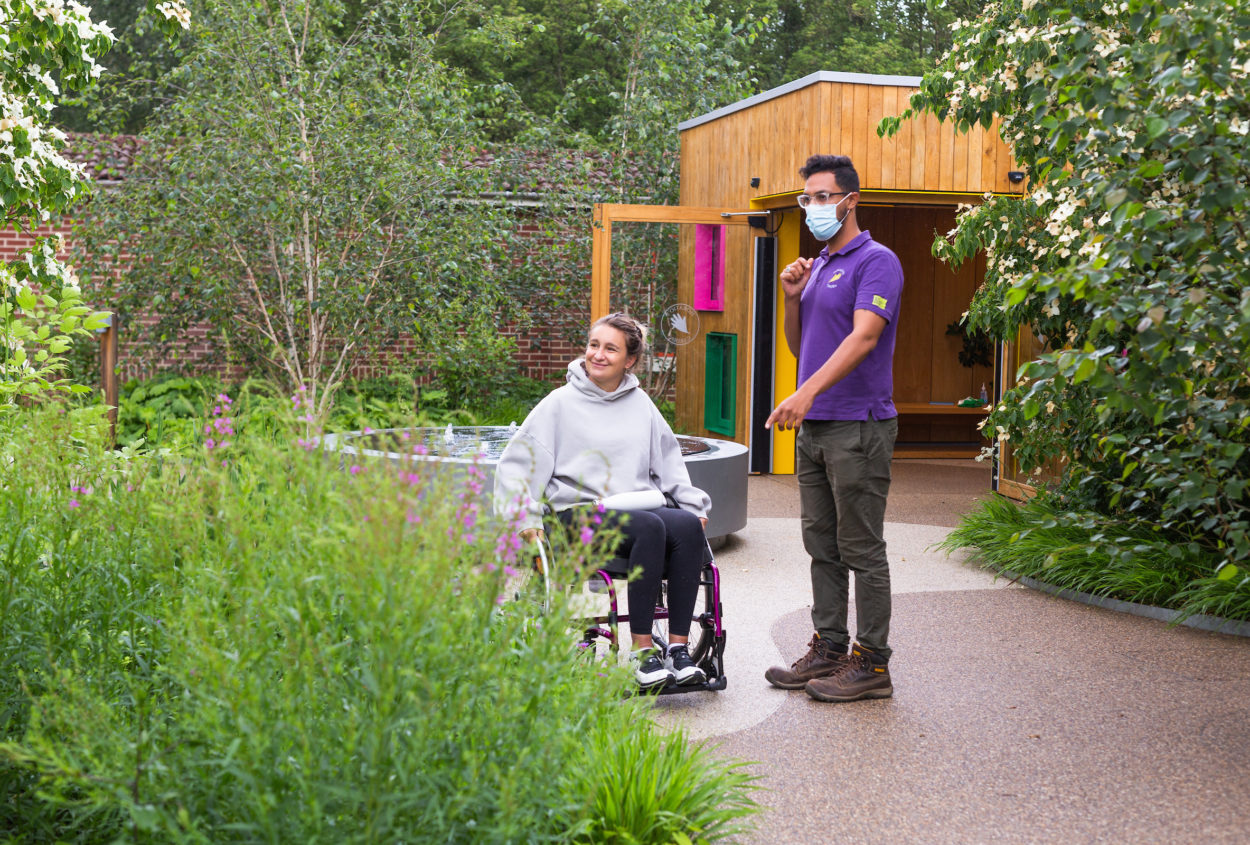 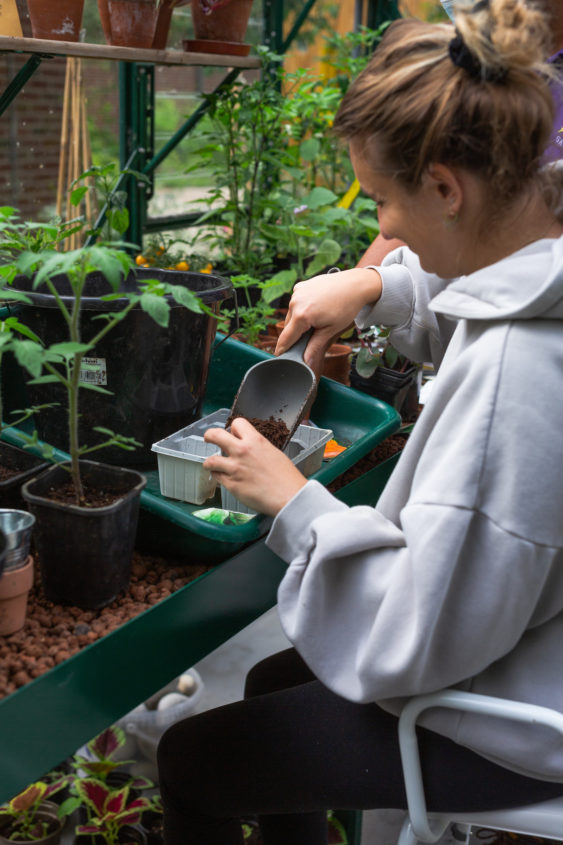 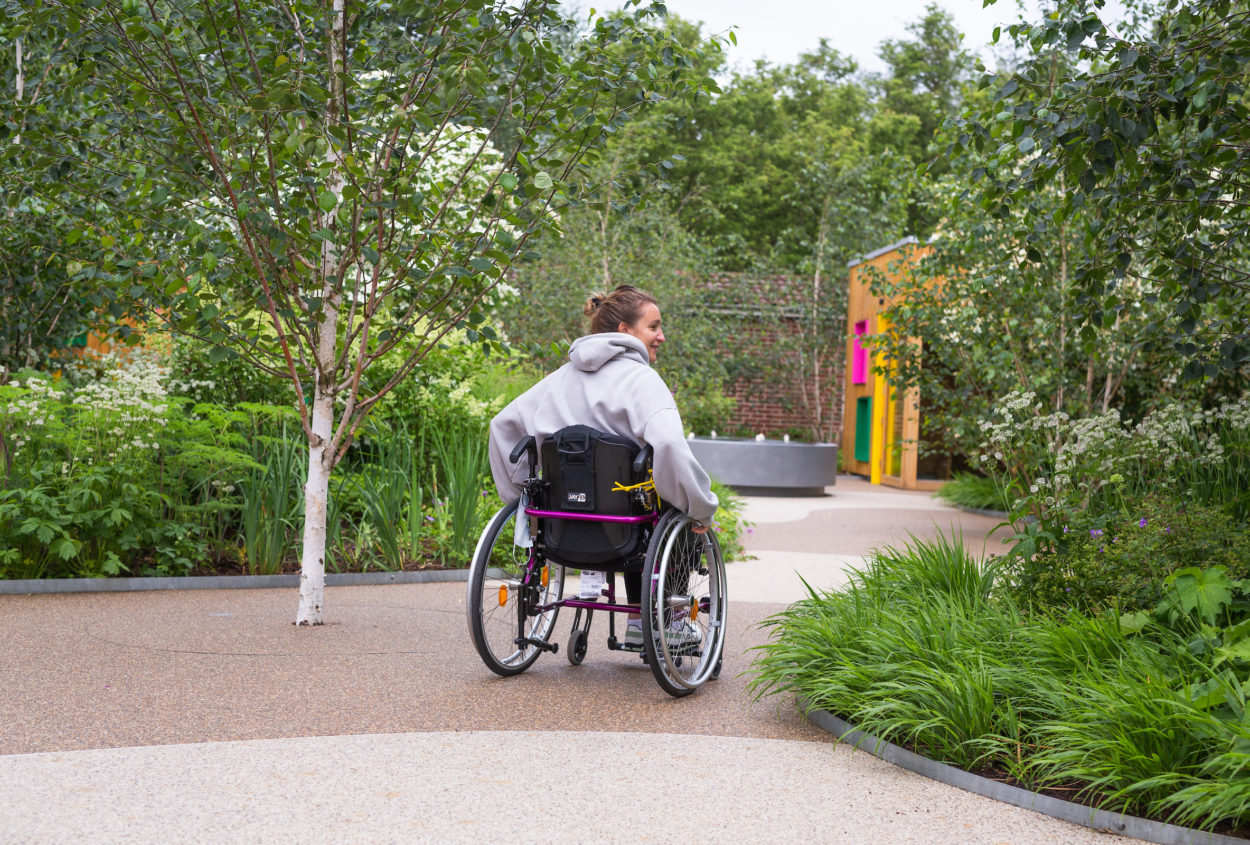 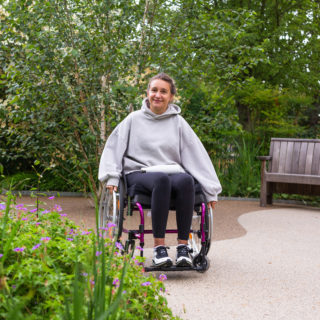 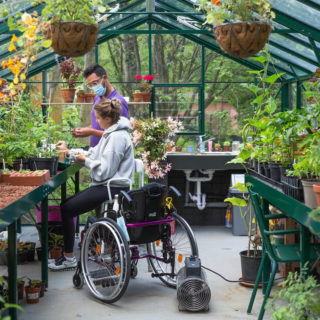 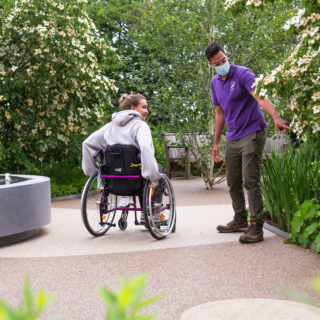 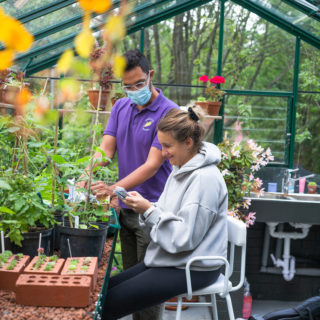 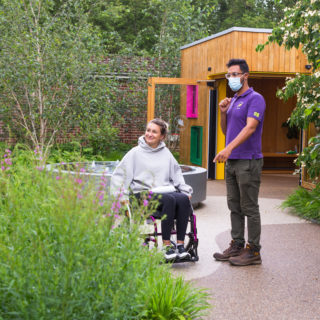 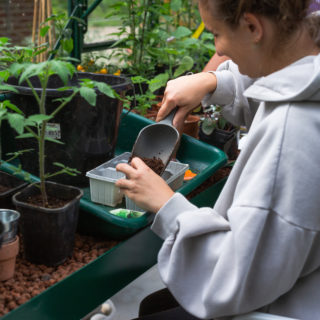 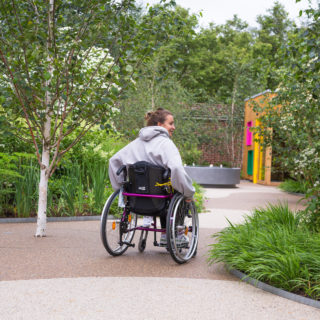