Having spent six days in Horatio’s Garden Stoke Mandeville, artist and dedicated charity supporter Miranda Creswell has been reflecting on her time in the garden, describing her residency as “totally inspiring”. She shared that “it was a very special two weeks” and that she “heard nothing but high praise for the garden and the staff and volunteers.”

To discover more about our other artists in residence, Claire Waltier MacGillivray and Jayne Woodhouse, please click on the respective links

Miranda’s project centered around placing magnifying glasses, or loupes, throughout the garden, with patients then looking through them to create their own works depending on what they saw.

People were immediately intrigued by the loupes, which prompted a gathering of people to safely join Miranda on her first day in the garden room. Together the crowd covered all kinds of subjects, from Turner to time, from bees to seeds. This encouraged everyone to embrace the creative mindset, which certainly set the tone for the coming days.

After spending the first day in deep, inspiring discussion, a handful of patients immediately began painting on Miranda’s second day in the garden, including Emma, who created postcards to send to some of her family in France. 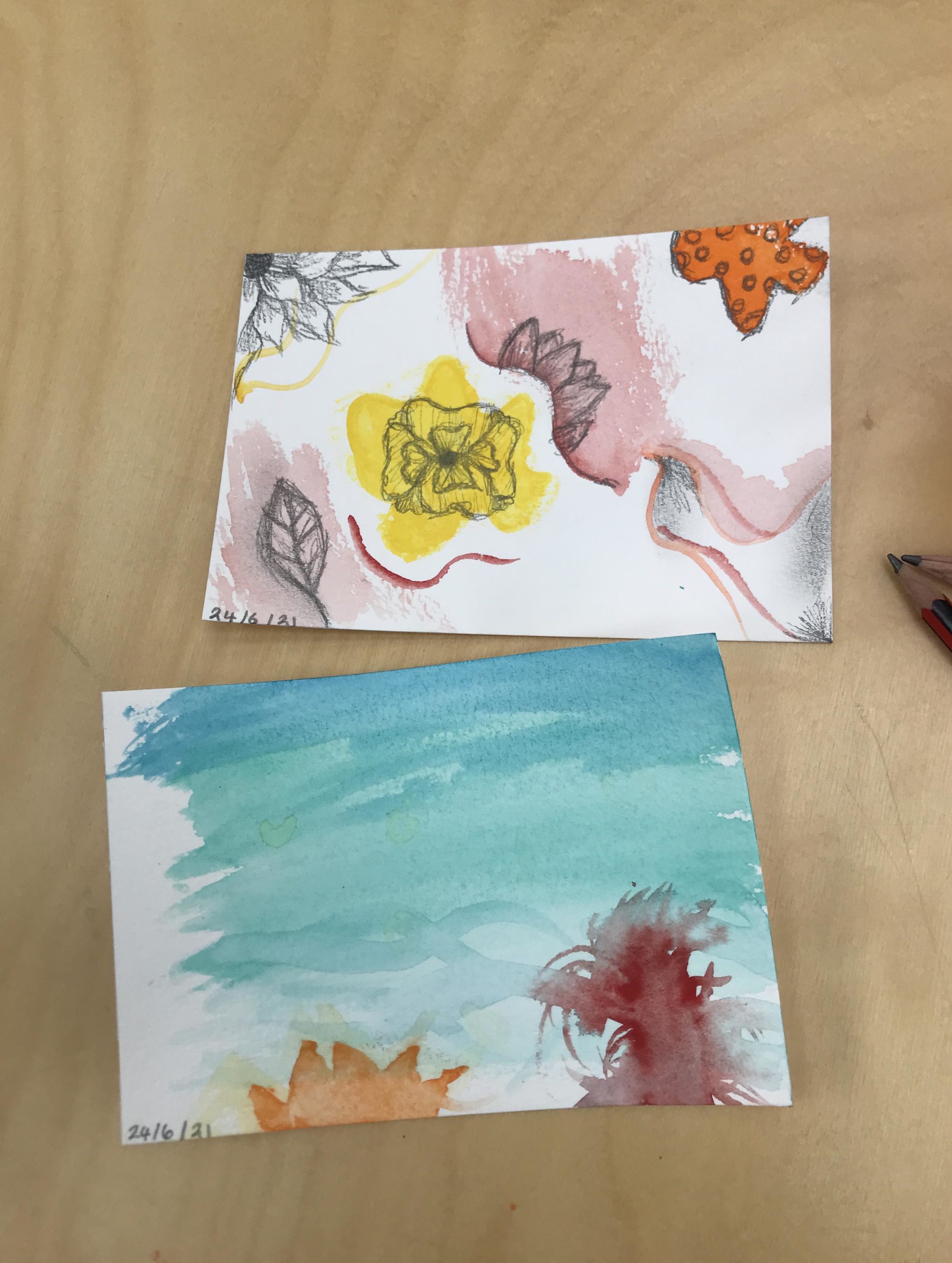 By the third day, enthusiasm for Miranda’s creative idea had grown again. As patients had been exploring the garden, carefully observing where the bees were congregating and pinpointing which areas were their personal favourites, they began to suggest where to place the loupes for maximum creative impact. Similarly, they artfully suggested that any finished works were placed amongst the planting as a form of natural framing, which perfectly showcased every artwork. 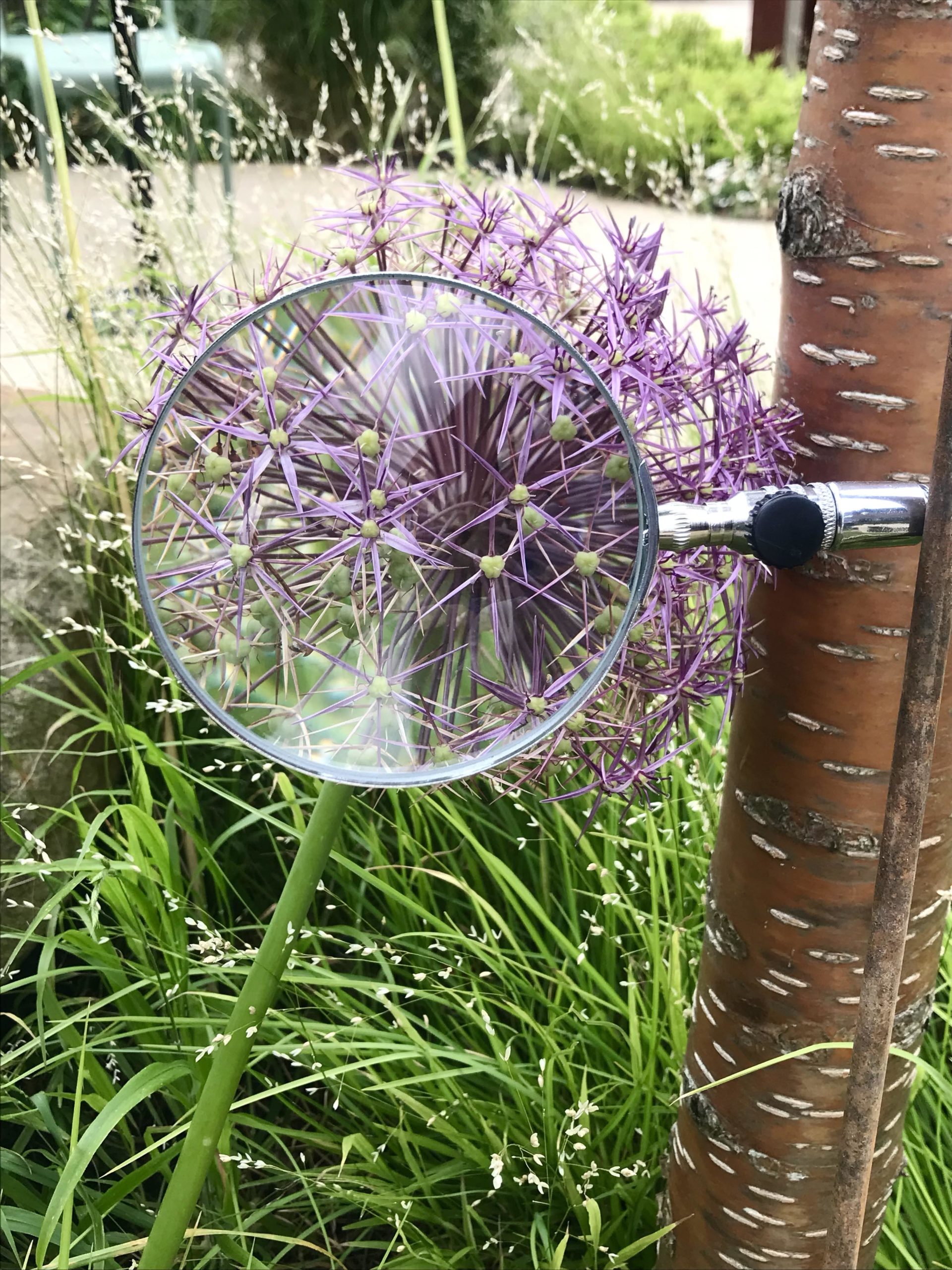 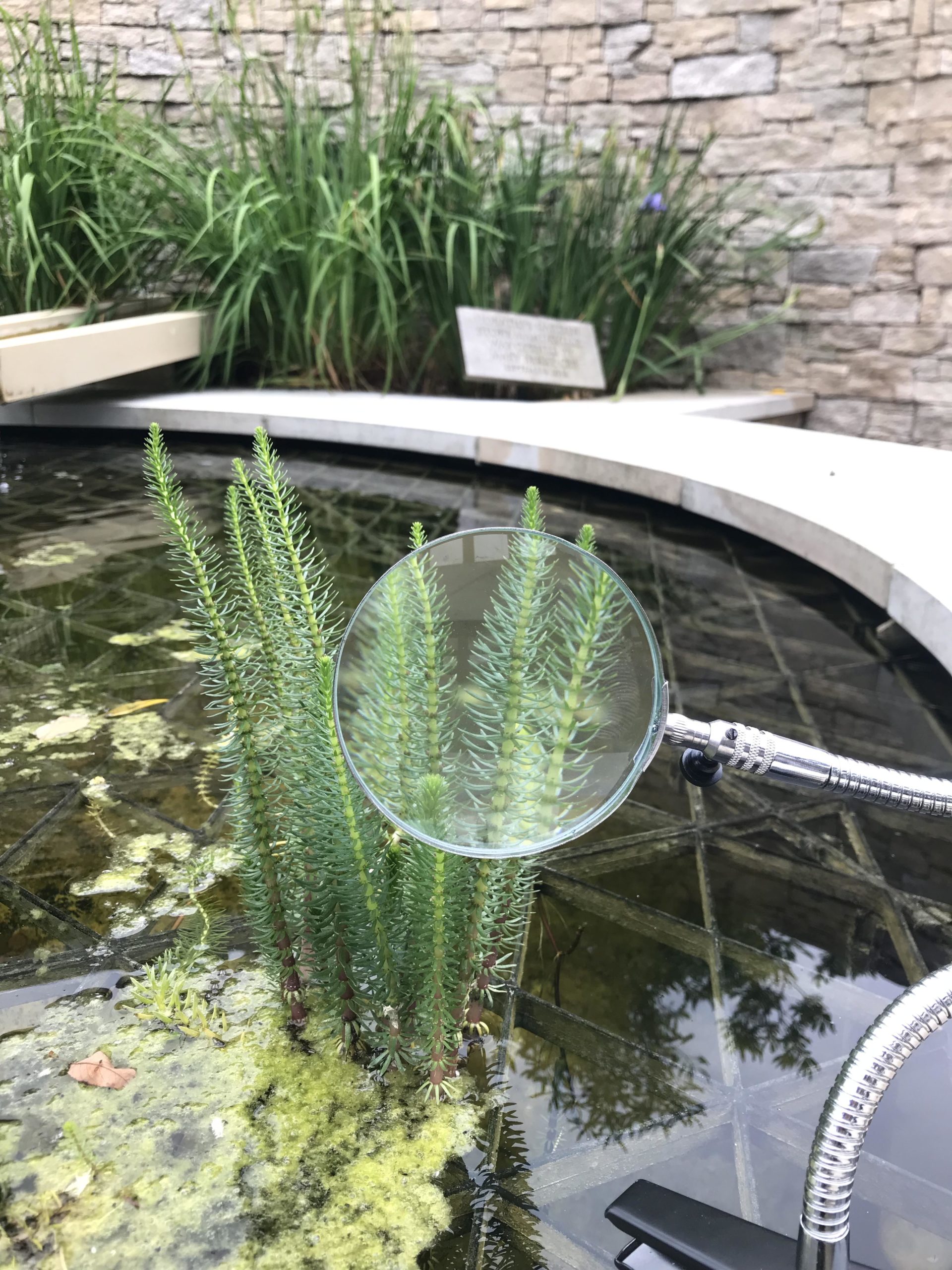 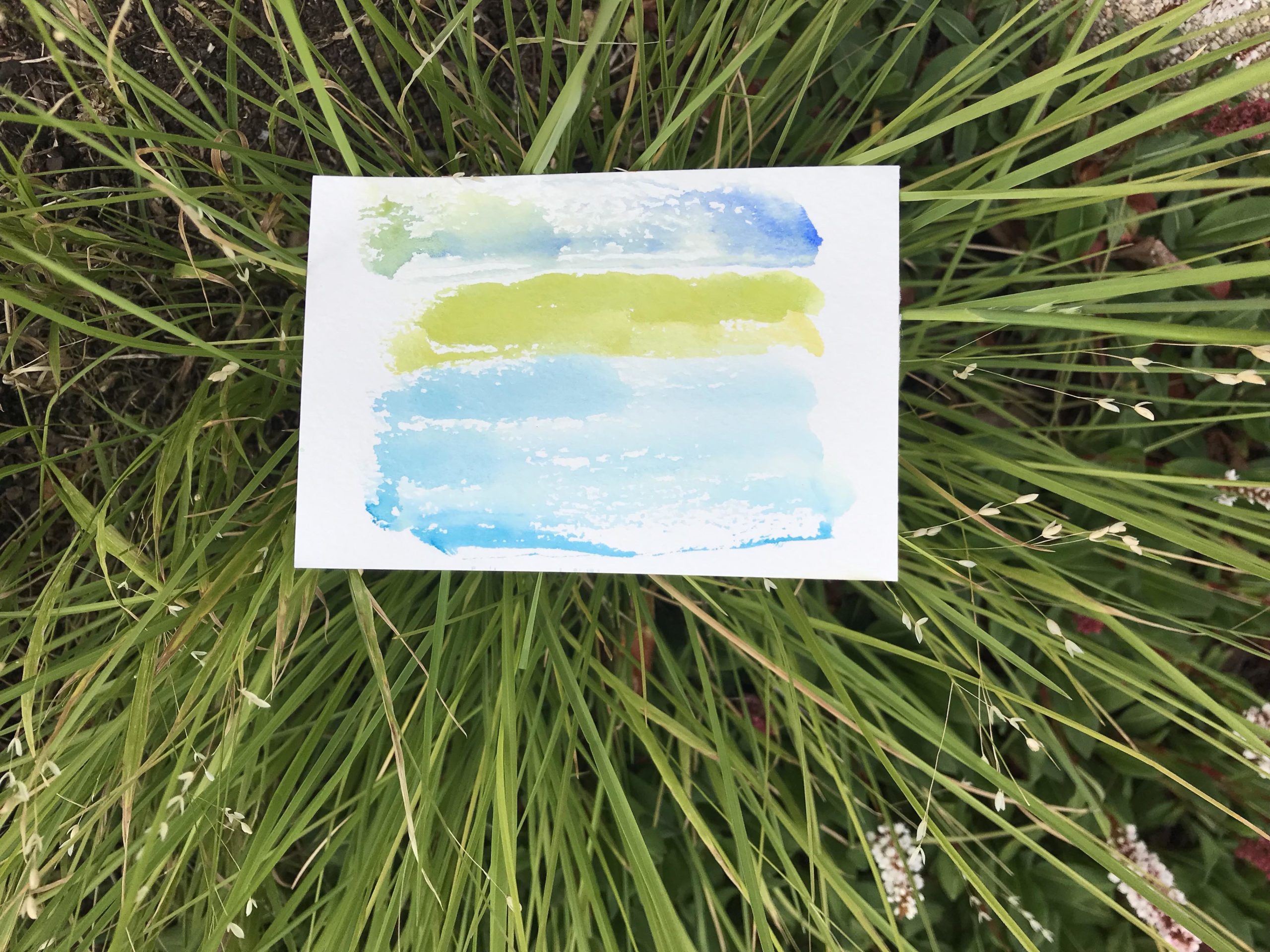 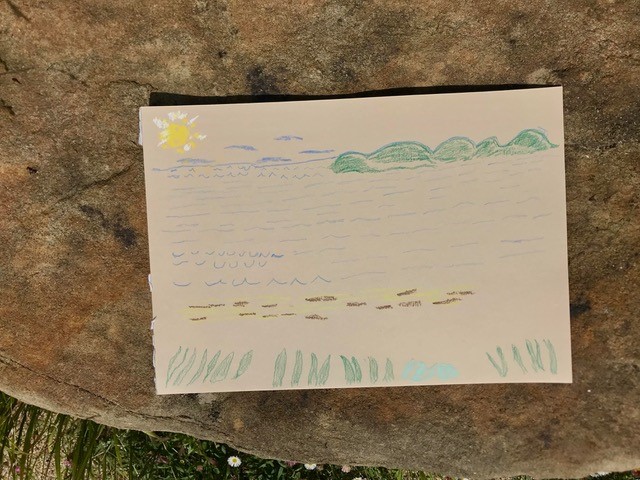 The emphasis placed on nature started to evoke memories too, with another patient joining Emma in the garden to paint seascapes she’d previously visited and could vividly remember in her mind. With the creative scope of the sessions organically broadening the more people looked into the loupes, a host of people gathered in the garden to paint and to generally learn more about art and nature.

One lady, Liz, began drawing by thoughtfully studying bunches of flowers, with Miranda giving her and others sketch books to take away with them so that they continue after she’d left for the day. Miranda also came bearing reference books for one man, a former Chemistry teacher, so that together they could discuss the works of van Gough, Hokusai and Rembrandt, as well as addressing the relationship between science and art. Similarly, having heard from one man that he wasn’t particularly artistic, but that he was interested in insects, Miranda delivered a sample box of bees to him, which was naturally much-appreciated. 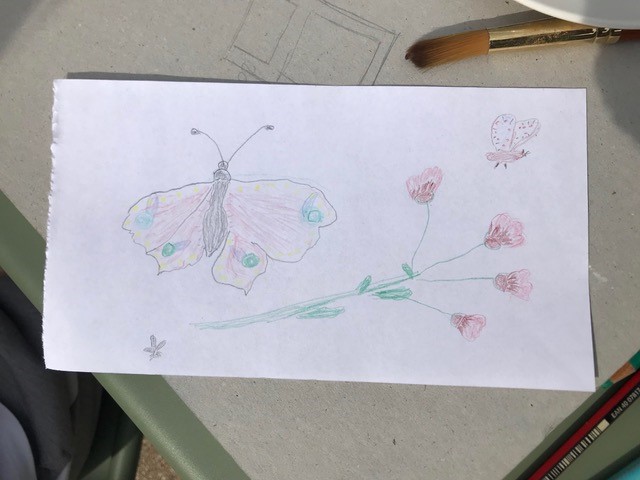 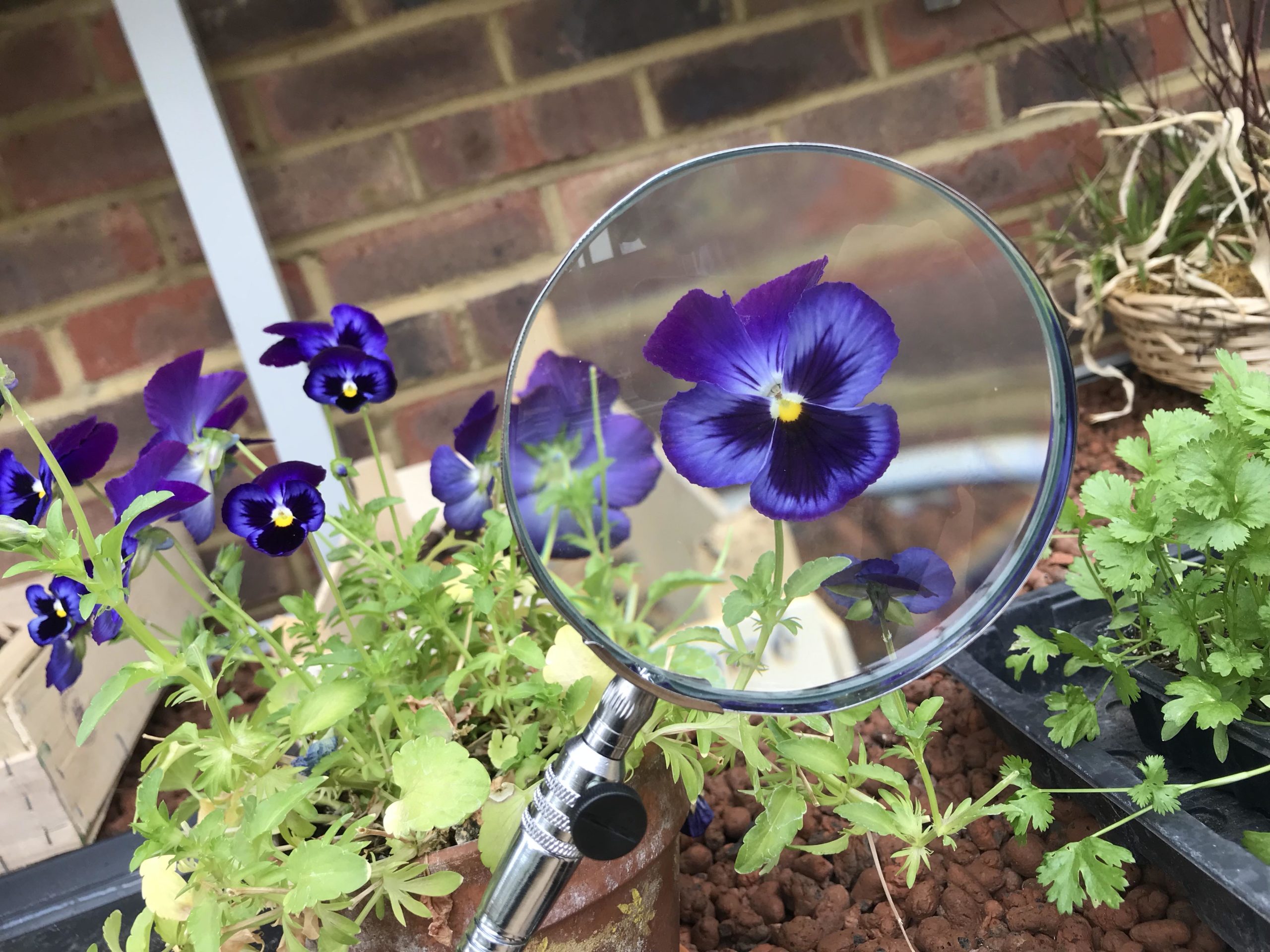 By now everyone expected to while away the day by embracing artistry and Miranda didn’t disappoint when she arrived for her fifth session in the garden holding a selection of postcards from the Ashmolean Museum and from an art supplier in Oxford. Handing them out to see what people thought, everyone enjoyed sharing their views and taking the time to thoughtfully consider the art before them.

Some people regarded them as especially inspirational, including one lady who took a postcard to show her Occupational Therapist, as together they’ve been working on a silk painting that she’s currently completing using her mouth. Liz was also inspired by the postcards to embark upon three pastel drawings, persisting despite one element of her chosen subject proving to be tricky and creating a beautiful, finished piece. Meanwhile, another patient happily accepted Miranda’s gift of three postcards, telling her that he’d be putting them around his bed as soon as he could.

By the end of Miranda’s time in the oasis, everyone was out painting and chatting in the garden. It was particularly wonderful to see patients encouraging each other, with Liz successfully persuading her entire ward to come outside and paint. Together they sat at a shaded table creating pastel drawings of natural scenes, whilst nearby Emma embarked upon another new piece, this time a butterfly in ink that she was absolutely delighted with. 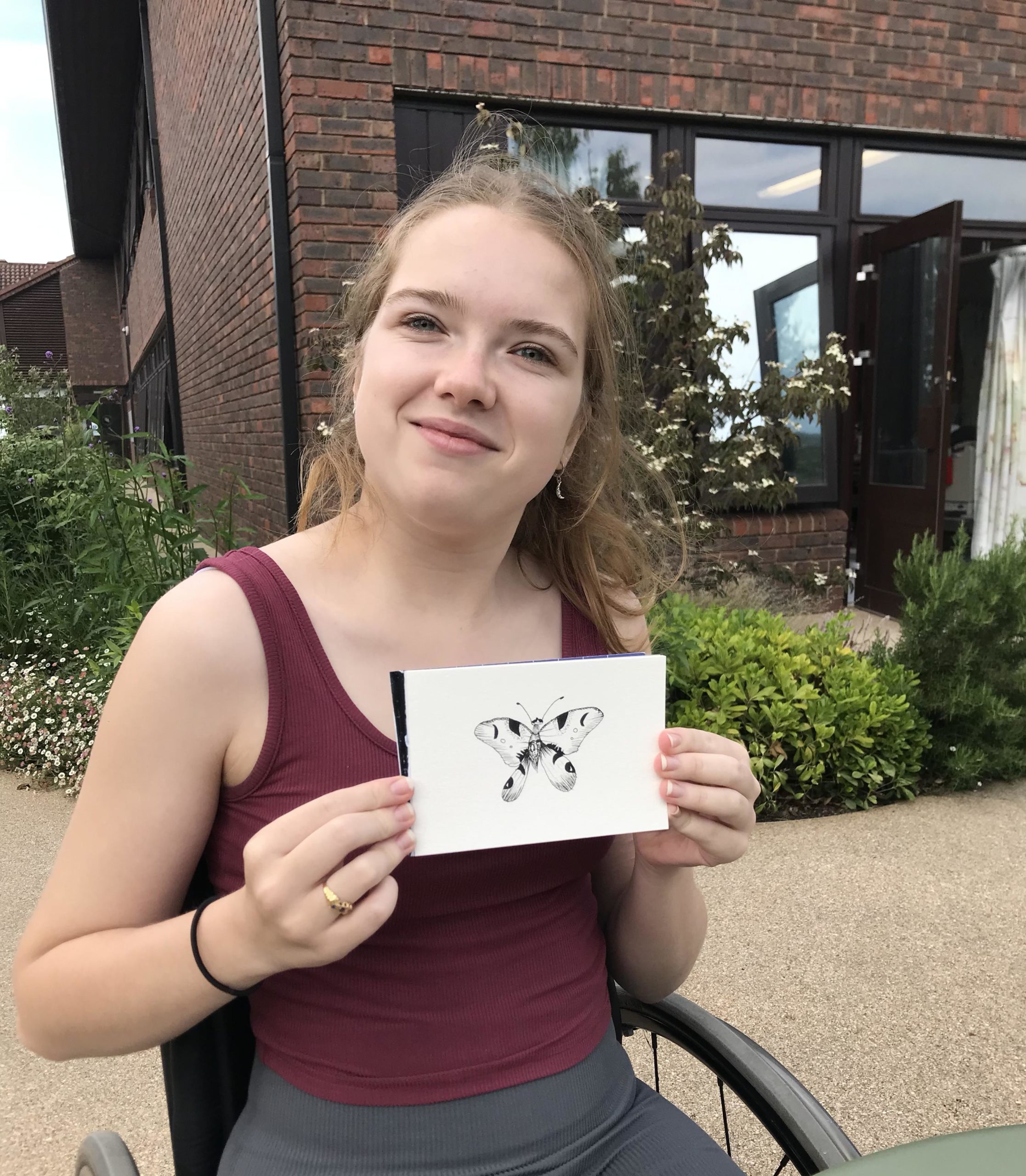 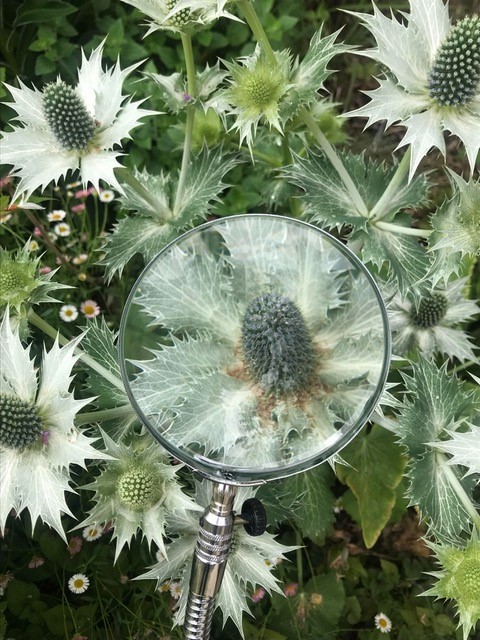 Head Gardener Amy has been involved throughout Miranda’s residency too, joining the groups and bringing different materials and seed heads from the garden for people to study, often engaging in the discussions they’ve prompted herself too.

Countless members of the NHS team working on the ward have kindly taken the time to tell patients how impressive their pieces are as well, sharing that Miranda’s time in the garden has evidently made a real difference.

It’s been a joy to welcome Miranda to the garden and we know everyone appreciated her presence. With comments including, “it’s been so relaxing doing this”, “it’s really interesting how it’s making me think about insects and bees” and “it doesn’t matter what you do, or how good it is, it’s just the pleasure of the activity”, we sincerely hope we’ll be able to welcome Miranda and many more artists back to the garden soon. With such a wealth of work produced, it’s a proves that a little bit of gentle, creative encouragement can be an immense, rewarding source of inspiration. 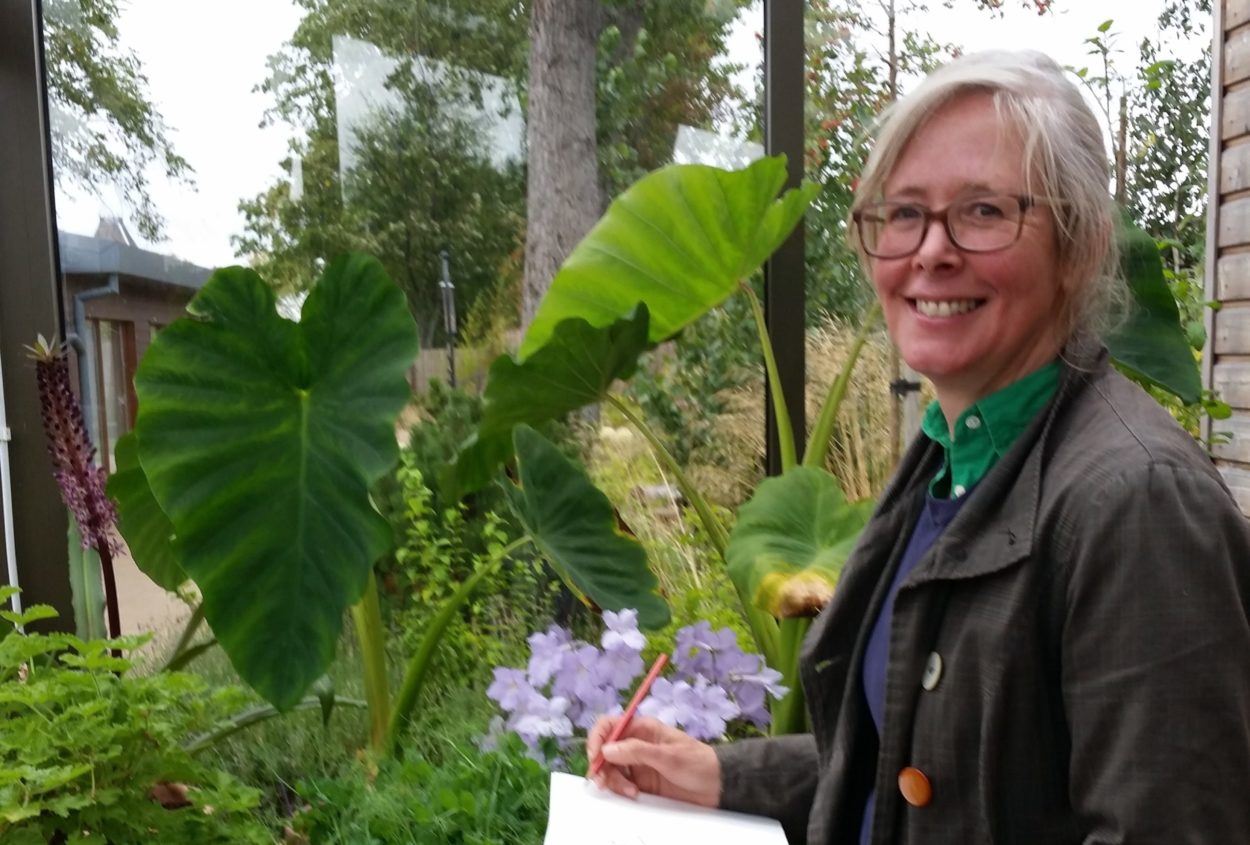 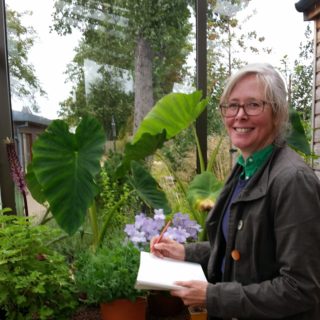